Running of the Bulls

The bulls took charge the day after election day, keeping the bears on the defensive throughout 2017. A GOP that controlled all three branches of government ignited early optimism among investors, who had expected easy passage of economic-friendly policies. But instead, gridlock kept investors on pins and needles until year-end, when Congress enacted a dramatic cut in the corporate tax rate and modestly shaved tax brackets for individuals.

Whatever your thoughts are about the president, investors are bipartisan. The long-term focus is on the economy and profits, i.e. the fundamentals. Investors really don’t care which party supports investor- friendly policies. Yes, there are important issues beyond the markets, and elections have consequences. But purely through the narrow prism of the market, it’s the economic fundamentals that matter.

For much of the year, improving economic fundamentals fueled bullish sentiment, sparking 71 closing daily highs for the Dow – a record (MarketWatch). Let’s review—

The economic outlook heading into 2018 hasn’t been this upbeat in years, as the U.S economy finished 2017 with momentum.

Moreover, the synchronized upturn in global growth not only aids the U.S. economy, it has been a big support for earnings of U.S. multinationals, according to FactSet Research. A reduction in the corporate tax rate is set to support earnings longer term, but it’s unclear how much has been priced in by investors.

I’m never one to throw caution to the wind and perspective is in order. Figure 1 illustrates annual winning streaks for the broad-based S&P 500 Index. We’re one year away from tying the record for consecutive annual advances going back to 1947 – see Figure 1.

Figure 2 offers another comparison. It highlights the six longest bull markets since WWII and their respective advances. 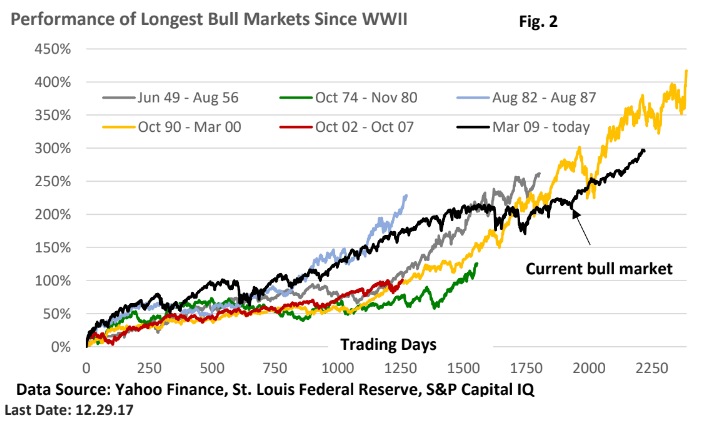 The current bull market is the second longest in both longevity and performance.

By itself, the second longest bull market since WWII creates an air of caution, but bull markets don’t die of old age or enter a danger zone based only on past performance. The end of a bull market has historically correlated with the onset of a recession. Since the late 1960s, only one bear market – the 1987 Crash – did not align itself with a recession – see Figure 3. 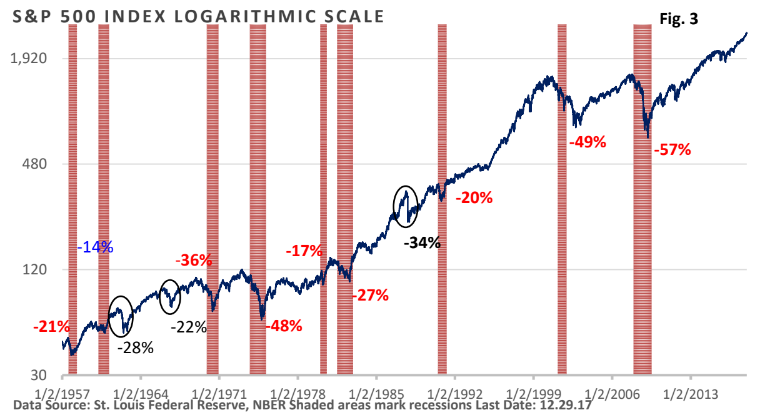 Still, any number of events not directly tied to the economic fundamentals could spark a bout of volatility.

Might we see a selloff early in the new year? It’s possible, if investors book 2017 stock profits in tax year 2018. Following 2013’s outsized 30% gain in the S&P 500 (St. Louis Federal Reserve), shares went sideways in the first three weeks of 2014, then slid 6% over the next couple of weeks. Yet, the year finished higher.

Bigger concerns would surround the fundamentals. If inflation were to unexpectedly heat up, we could see a more aggressive Federal Reserve, one that deviates from its currently stated path of gradual rate increases. Odds of an unexpected jump in inflation are low, but keep an eye on oil prices, which have topped $60 per barrel for the first since June 2015 (St. Louis Federal Reserve).

However, a Fed that turns more aggressive in response to a spurt in economic growth is less of a concern, in my view, since a robust economy would lend added support to corporate profits. Of course, any unexpected economic slowdown would likely create a stiffer headwind for earnings and stocks.

For those who enjoy looking at probabilities, a 20%+ advance in the S&P 500 in one year does not necessarily mean we’ll see a pullback the following year.

For long-term investors, it boils down to an investment plan that is rooted in a number of factors, including the economic fundamentals. Shorter term, the fundamentals may not always be positive. But discipline, patience, and investment decisions that don’t spring from an emotional response to disconcerting events have historically been the most efficient path to one’s goals.