A Milestone and Turkey Talk

It’s been a long-running bull market. Born in the depths of the Great Recession, the current bull market, as measured by the S&P 500 Index, has sidestepped a bear market since bottoming on March 9, 2009 at 676.53 (St. Louis Federal Reserve). A bear market is generally defined as a 20% drop or more. The widely followed index closed August 31 at 2,901.52 (WSJ).

On August 22, the current bull market extended its run to 3,453 calendar days (CNBC), taking the crown away from the previous champion, the run-up of the 1990s – see Figure 1. In some respects, it’s just a date. But it’s also a milestone. 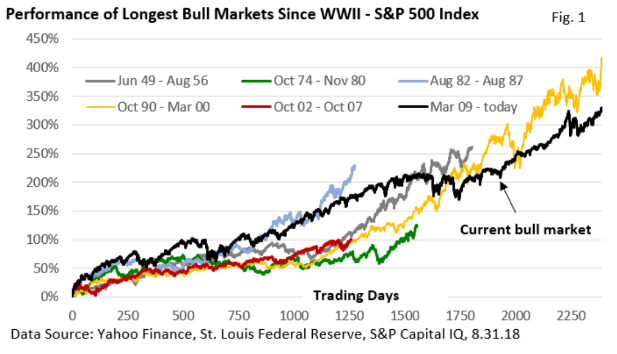 More importantly, investors who have adhered to a disciplined approach that includes a diversified stock portfolio have been rewarded.

Sure, there have been times when the bulls have been knocked off balance. Greece, European financial woes, China anxieties, and the collapse in oil prices forced corrections of at least 10% since 2009.

An uptick in Treasury bond yields earlier this year pushed investors to the sidelines. What may have been a modest dip turned into a 10% correction when products tied to market volatility exacerbated selling.

While some sectors have suffered, trade frictions also caused jitters but have yet to trigger a significant slowdown in the U.S. Given strong profit and economic growth, low interest rates, and low inflation, investors have once again focused on the medium- and long-term drivers of stock prices – the favorable economic fundamentals.

From time to time, a tremor from an overseas incident reaches our shores and impacts our markets. In most cases, when we look back at the event, it barely creates a ripple at home. It’s a footnote in market history few remember.

Russia’s invasion of Ukraine four years ago was a one-day market event. The U.K.’s Brexit vote in 2016 jarred investors for a couple of days, but that was about it. Europe’s financial turmoil in 2011 created waves. But in each case, none of these incidents caused significant harm to the U.S. economy.

In each case, cooler heads prevailed, and longer-term investors, those who stuck with a disciplined approach and avoided the temptation of an emotional response, were rewarded.

That leads us to the nation of Turkey. Problems have been simmering for a long time in Turkey. Last month, U.S. investors reacted when President Trump tweeted he wanted to double steel and aluminum tariffs on the struggling nation. It was like lighting a match in an already parched forest. 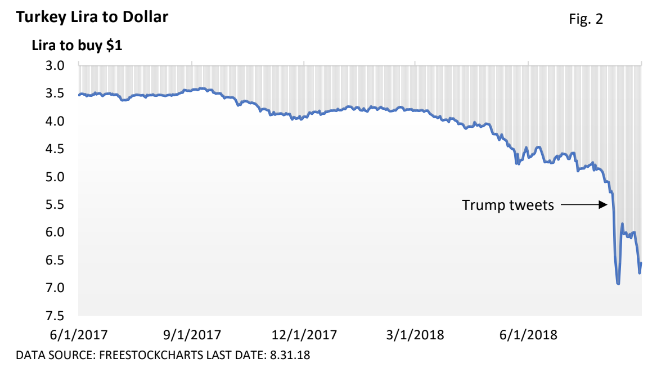 The lira, which has already begun to sag, quickly extended losses – see Figure 2. The Financial Times reported the European Union was concerned that some banks might have too much exposure to Turkey, and shorter-term investors were quick to react – at least for one day.

It’s not that a currency crisis can’t lead to what’s called “contagion,” when a financial crisis in one corner of the globe spreads. We saw that in 1998 when Russia defaulted. But odds of such an event are low.

Turkey’s problems have been in the making for years. It has borrowed too much money – much in dollars – to grow its economy. If borrowed in dollars, interest accrues in dollars, and loans must be repaid in dollars. Rising U.S. interest rates and rising inflation in Turkey conspired against the lira.

Issues in other troubled areas also bear watching. Argentina comes to mind. But bottom line, it was a one-day selloff that amounted to less than one percent, and attention quickly returned to the positive economic fundamentals.

As we approached the end of August, the S&P 500 Index, the NASDAQ Composite, and a number of other key indexes rose to record highs (MarketWatch, various sources).