It’s Not Just U.S. Stocks that Have Surged

U.S stocks haven’t been the only winners since election day. Stocks in Europe and around the global have performed admirably against a backdrop of faster economic growth and still-low interest rates.

Since the beginning of November, a major market index in Europe has outperformed the S&P 500 Index3, a key gauge of large U.S. firms – see Figure 1.

An important measure of emerging market stocks fell sharply in the wake of last year’s election. While U.S. markets jumped amid expectations of tax cuts and infrastructure spending, investors snubbed emerging markets, fearing that Trump’s trade policies would punish the economies of developing nations. As Figure 1 highlights, those fears have since subsided. 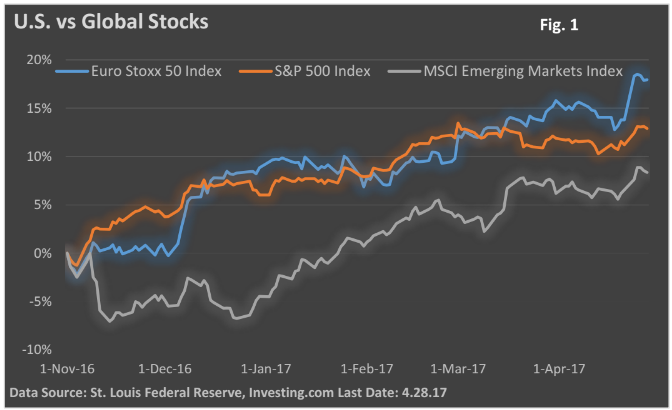 The Euro Stoxx 50 is an unmanaged index of major European companies which cannot be invested into directly. Past performance does not guarantee future results.

The MSCI Emerging Markets Index is an unmanaged index of companies in developing nations. The index cannot be invested into directly. Past performance does not guarantee future results.

What’s going on? For starters, major global central banks outside the U.S. continue to pour money into the financial system through the purchases of bonds and other financial assets. Two in particular are the European Central Bank and the Bank of Japan, which have yet to hint at increasing rates.

Of course, monetary policy alone doesn’t determine the direction of stocks. The Federal Reserve has lifted rates three times since its rate-hike cycle began, and U.S. shares are near or at record highs. Besides, ultra-low rates, coupled with non-existent growth, would not be a recipe of surging share prices.

More importantly, faster economic activity that fuels growth in corporate profits, is aiding stocks at home and around the globe.

In conjunction with Q1 earnings releases, a number of major U.S.-based industrials, which conduct a large portion of business overseas, have raised forecasts for 2017 (CNBC, firm-specific investor relations). This is important because simply maintaining guidance would have suggested growth might not be accelerating.

Moreover, FactSet reported last month that S&P 500 companies with greater global exposure are posting higher earnings than those with most of their sales at home.

The Organization for Economic Cooperation and Development (OECD)’s Composite Leading Indicator, which covers its 35 members (plus 6 major non-members), has been positive for 13 of the last 14 months. 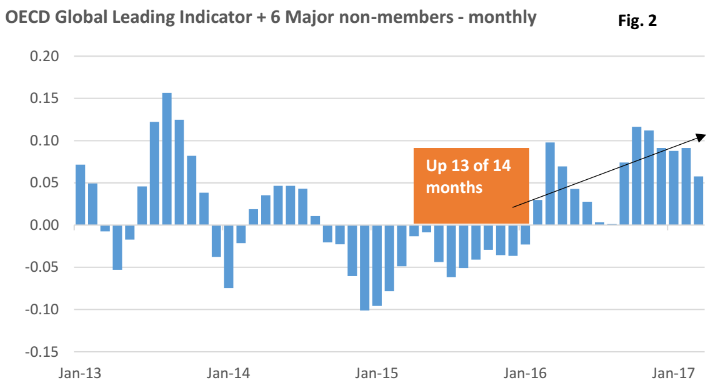 Markit Economics publishes its monthly purchasing manager (PMI) surveys for several major countries. The PMIs that survey nations in Europe just hit their best level in six years, signaling the growth in Europe is accelerating. Further, the threat of deflation in Europe has waned, aiding the more upbeat outlook.

While risks remain, China, which came under pressure last year, posted annual GDP growth in Q1 of 6.9%, the fastest increase since Q3 2015 (MarketWatch).

Emerging markets step on the gas

Emerging markets (EM) can be defined as a nation’s economy that is progressing toward becoming advanced. It is typically characterized by faster growth than developed nations, but is more subject to volatility, political instability, and external shocks.

China and India are the largest EM economies. Other nations include South Korea, Brazil, Taiwan, South Africa, and Poland.

Depending on your risk profile, we may recommend investments in these countries be included as a part of a well-diversified portfolio. But be aware they can exhibit a heavier degree of volatility than what might be associated with mature economies.

That said, investors shrugged off initial anxieties reflected in the key gauge that tracks EM economies shortly after Trump’s election and have narrowed the gap with Europe and the U.S. – Figure 1.

In addition to growth prospects, the softer dollar and the general belief the Fed will remain in a go-slow mode have also aided emerging markets.

Let me explain. A stronger dollar can hurt EM economies, as some nations issue debt denominated in U.S dollars. So, a rise in the dollar makes it costlier to repay loans. Plus, a more aggressive series of Fed rate hikes could boost the dollar as well as siphon cash away from EM economies and into the U.S.

Many EM nations are dependent on commodity prices, as raw materials are a key export. More recently, commodity prices have tiptoed higher following a long slide, per the CoreCommodity CRB Index, a broad- based basket of commodity prices. Furthermore, earnings expectations are up sharply in 2017 versus one year ago (Charles Schwab).

Bottom line—it’s been a confluence of factors that have boosted the fortune of stocks around the globe. It’s also an important reminder that a long-term investment plan for most investors should include a diversified international component.