A Bright Start to the New Year

Stocks took a beating late last year, with key market indexes putting in their 2018 lows the day before Christmas (WSJ, various sources). For daily-market watchers – something that’s not recommended for longer-term investors – volatility and quick shifts in sentiment can be maddening. Besides, over a shorter period, markets can overshoot and can undershoot. 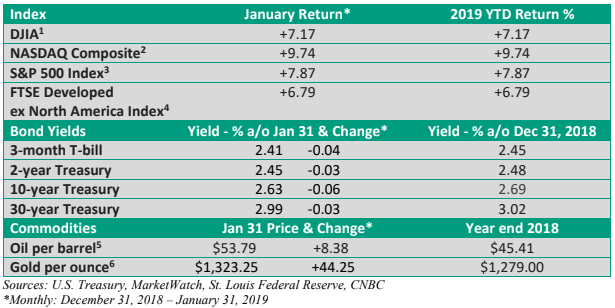 Since Christmas Eve, major U.S. market indexes have stabilized and posted strong gains. What’s behind the upturn in sentiment? Let’s review some of the factors behind the rally. 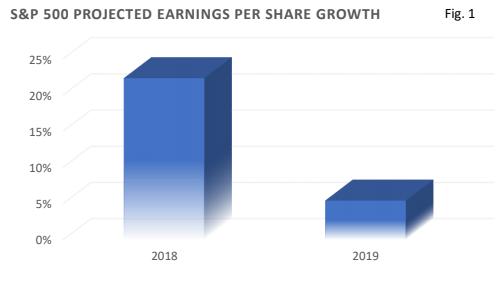 Does global growth matter? The short answer – sort of

U.S. exports account for about 13% of total U.S. economic activity (U.S. BEA data), and S&P 500 companies gather an estimated 30% of sales from overseas (exports are products made at home and sold overseas; overseas sales may or may not have originated in the U.S.).

When global growth slows, sales from the larger multinationals may feel some of the pain. In January, Apple (AAPL $166) and Caterpillar (CAT $133) warned that weakness in China was pressuring sales. And the major stock market indexes reacted negatively on those days.

We sometimes experience volatility when bellwethers report unexpectedly bad news (the opposite can be true, too), but as Figure 2 illustrates, China does not account for a significant share of corporate revenues. U.S. exports to China make up about 1% of U.S. economic activity (U.S. BEA data). 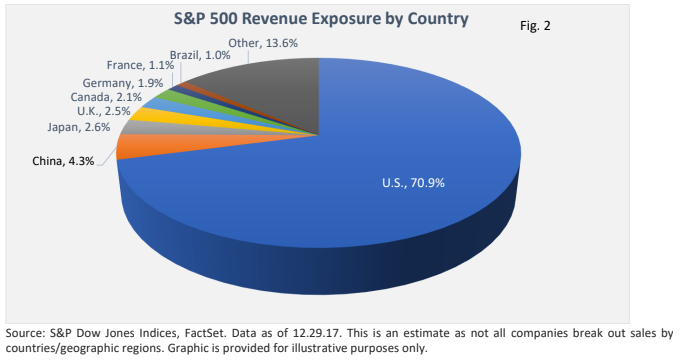 The S&P 500’s advance last month was the best January in over 30 years, per the Wall Street Journal.

Continued weakness in the global economy and the inability to conclude a trade agreement with China that protects U.S. interests may inject volatility into short-term trading. But a more flexible Fed and continued economic and profit growth created tailwinds for stocks last month.