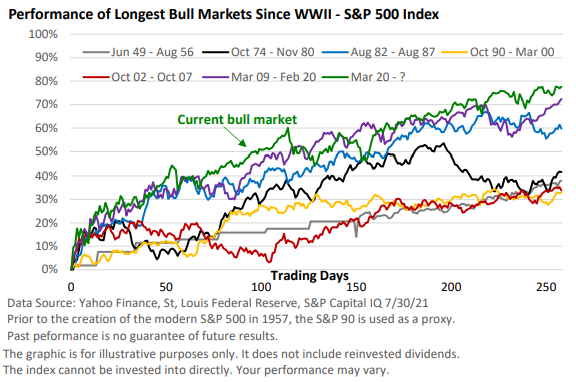 Before we get carried away and extrapolate today’s upward move, let’s also point out that the nearly 10-year bull market of the 1990s got off the ground slowly. In other words, let’s state something we already know, but bears repeating. Past performance is not a guarantee of future performance.

A review of the major themes driving stocks

If we step back and look at what is driving stocks, we can’t credit just one variable. Instead, several tailwinds have been responsible for the strong rally. These include:

Looking at it as an equation, low interest rates + strong corporate profits tied to upbeat economic growth have led to a series of new highs in the major market indexes.

Yet, markets are never without risk. While there have been no major recent corrections, the risk we might see some type of pullback later in the year can’t be dismissed.

Economic growth is expected to continue this year, barring a sharp uptick in new Covid cases and related restrictions, which could create stock market volatility.

Inflation has been much higher than the Federal Reserve and many analysts had expected. If the surge in inflation isn’t temporary and proves to be more persistent than expected, we could see the Fed hit the monetary brakes faster than most anticipate.

For now, the Fed’s own projections released in June suggest the central bank may be penciling in two small rate hikes in 2023. Even if that occurs, rates would remain low by historical standards

Except for the 1987 stock market crash, bear markets (a 20% or greater decline in the S&P 500 Index), have been centered around recessions, according to S&P 500 data from the St. Louis Federal Reserve and Yahoo Finance. That streak has been in place since the mid-1960s.

Following the big gains in stocks, it’s important to add that the investment plan is also designed to keep investors from taking on too much risk, when big market gains sometimes encourage individuals to dive too heavily into stocks.