The lack of volatility in 2017 was nearly unprecedented. We witnessed 310 trading days without two consecutive daily pullbacks in the S&P 500 Index3 of at least 0.5%, according to research firm Bespoke Group.

The unprecedented streak ended in late January. History tells us we “revert to the mean (average).” Timing such events, however, is nearly impossible.

In 2018, the broad-based index of 500 major companies rose or fell by at least 1% 64 times versus just eight in 2017. Yet, as Figure 1 highlights, last year’s volatility was not out of the range of what might be considered unusual. 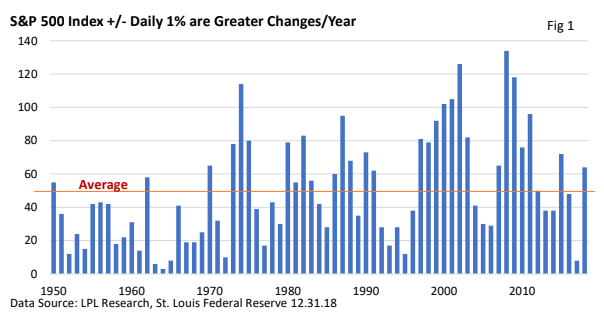 The modern S&P 500 Index began in 1957; prior data using S&P 90. Both are unmanaged and cannot be invested into directly.

Figure 2 illustrates the late-year downturn, but it also highlights that year-end weakness was not out of the ordinary either. 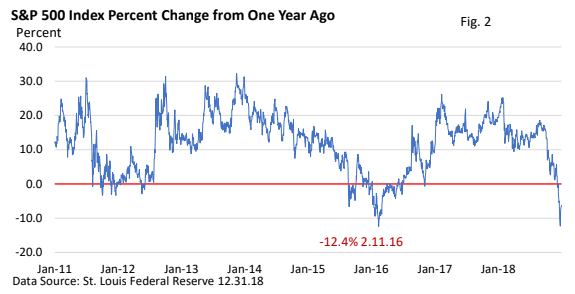 The global economy has been slowing and the US economy is showing signs of moderating. And with it, analysts have trimmed 2019 profit estimates (Refinitiv formerly Thomson Reuters). Consequently, some of the decline has been in reaction to the fundamentals. But was the selloff overdone?

Eight rate hikes by the Federal Reserve since the rate-hike cycle began didn’t hamper bullish sentiment, that is, until October. Communication faux pas by Fed Chief Jerome Powell in early October and late December took a toll on sentiment.

While trade frictions between the U.S. and China added to the souring mood, the issue extends beyond its direct impact on stocks. For starters, there is a bipartisan consensus on Capitol Hill that China doesn’t play fairly. Furthermore, Chinese theft of intellectual property and forced technology transfers are creating national security issues.

While many in the US and around the world share the president’s goal of fair and free trade with China, the current path to obtain the desired outcome has generated some of the tensions we’ve seen in the market. This is not meant to be a political statement, only a reflection of the reality that stocks have traded down on negative trade headlines. 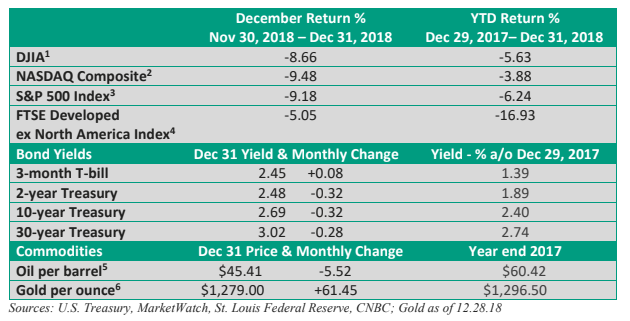 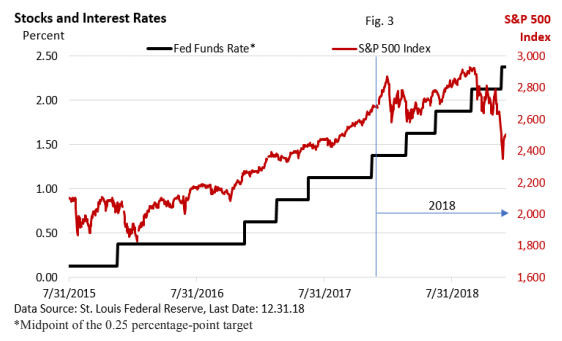 The broad market indexes can be unpredictable, and selloffs can and do occur. While we have yet to break the 20% threshold that marks a bear market, the peak to trough for the S&P 500 came within 0.20 percentage points of bear territory. We saw similar drops in 1998 and 2011 without a corresponding recession.

Despite regular pullbacks, the S&P 500 has produced a compounded annual return of nearly 10% since 1928, all dividends reinvested. That means a $100 investment 90 years ago was worth $382,370 at year end. The same investment in the 3-month T-bill would have turned into $2,052 and $7,366 for the 10-year Treasury bond (Data sources: NYU Stern School of Business Stock, Bond Returns, S&P Dow Jones Indices, LPL, St. Louis Federal Reserve; past performance no guarantee of future performance).

Selling low and buying high isn’t a way to reach your financial goals. It is one reason we recommend an evidenced-driven, highly diversified investment plan. It’s not only a roadmap to your goals, it reduces volatility and helps separate the emotional component that may encourage decisions based on the sentiment of the day. You know, when euphoria encourages too much risk, and pessimism pushes us to sell after a decline.

Following a diversified plan that incorporates factors outside of market sentiment has historically been the best path to reach one’s financial goals.

If you have any questions or concerns, feel free to reach out to me. That is what I’m here for.