It’s been one year since the Covid pandemic pushed the economy off a cliff. Fast forward to today. What a difference a year makes. The economy has roared back. Some sectors have benefited enormously, while others have lagged.

Gross Domestic Product (GDP), which is the largest gauge of goods and services in the economy, slowed in Q4 from Q3’s record annualized pace of 33.4%, but it accelerated in Q1 to a 6.4% annualized pace – see Figure 1. 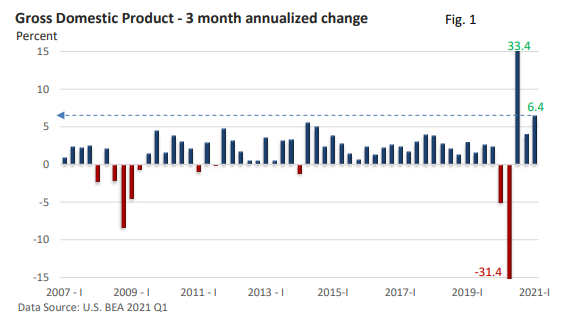 Successful rollout of the vaccines, fewer restrictions on businesses, and stimulus money contributed to Q1’s upbeat pace. Breaking down some of the numbers, consumer spending jumped 10.7% in Q1 versus a more subdued 2.3% in the final quarter of last year.

What the consumer does is important because consumer outlays account for nearly 70% of GDP, according to U.S. Bureau of Economic Analysis (BEA) data.

However, consumer outlays have been distorted by the pandemic, as Figure 2 illustrates.

Spending on durable goods, which is generally defined as purchases designed to last at least three years, such as autos or home appliances, surged in Q1. Big-ticket items have benefited enormously from stimulus checks. 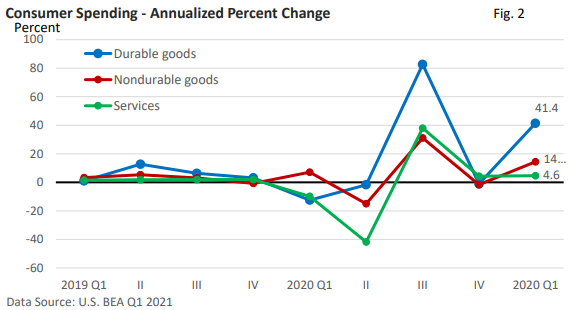 Yet, services continue to lag. Note the steep decline in Q2 2020 for services amid widespread restrictions on sectors that rely heavily on person-to-person interactions. The cash was available, but the transmission mechanism between consumers and business was blocked. 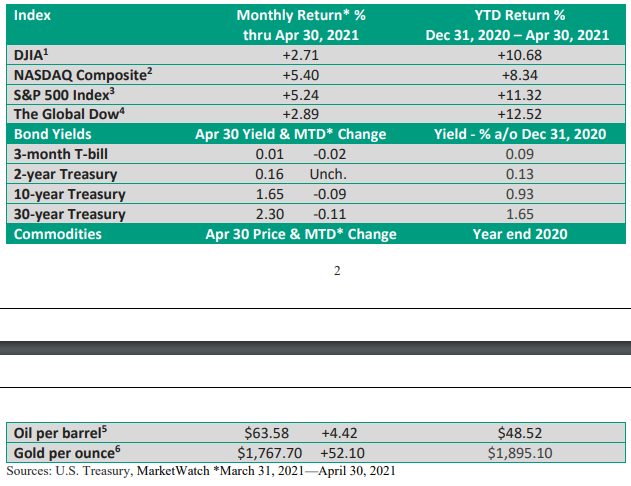 Where might we be headed? Economic forecasting is inexact. While the strong stock market rally indicates investors sniffed out the economic rebound over the last year, most forecasters were far more pessimistic.

A resurgence in the virus could put a damper on the rest of the year, but “excess savings” may be set to drive activity for much of 2021. It’s one reason investors have pushed the major stock market averages higher.

Moody’s Analytics defines excess saving as savings “above what households would have saved if the pandemic had not occurred, and their savings behavior had been the same as in 2019.”

In other words, it’s the extra cash that was squirreled away as we curtailed spending amid lockdowns and social distancing restrictions on various businesses.

As of the first quarter of 2021, Moody’s estimates that excess savings around the world is over 6% of global GDP. The U.S. has the world’s highest rate of excess savings, equal to 12% of GDP, or $2.6 trillion. Stimulus checks, paycheck protection loans, and very generous jobless benefits have all contributed to the stockpiling of cash.

We see it in the elevated savings rate—see Figure 3. 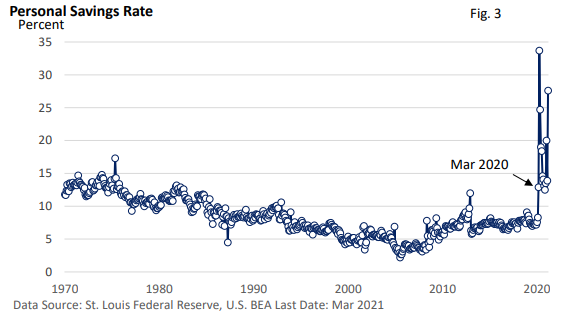 Might the savings rate eventually settle at an elevated rate? It’s possible, but it’s cash that seems set to power growth as the economy reopens.