The economic recovery began in July 2009 – that according to the National Bureau of Economic Research, the official arbiter of recessions and economic expansions. A quick review of the math, and it means the current expansion just turned nine years old, or 108 months.

Let’s put that into perspective. We’ve surpassed the long-running expansion of the 1960s by two months. We’re within striking distance of the all-time longest expansion, which ran through the 1990s and lasted exactly ten years – see Figure 1. 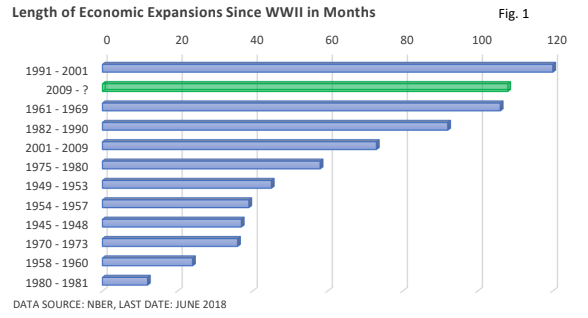 It has not been an impressive economic recovery – see Figure 2. The graphic illustrates it has been the weakest since at least 1950 (the U.S. government began collecting quarterly data in 1947). But it’s probably one reason for its longevity.

You see, fast growth can sometimes force the Fed to quickly hike interest rates, which can stifle the economy. Or, it can create speculative excesses – economic booms – that sow the seeds of the next recession. We experienced that in the late 1990s.

Besides the general slowdown in growth post WWII, two things stand out.

First, recessions are typically short interruptions in what otherwise has been a long-term upward trajectory for the economy. Second, the 2001 recession was so shallow, it failed to produce a year-over-year (y/y) decline in GDP. In fact, the U.S. economy generated an uninterrupted period of y/y GDP growth that lasted nearly 17 years!

Still, growth stalled in 2001, the jobless rate rose, and the shallow recession was enough to prick the bubble in stocks, which had become extremely overvalued.

The current cycle is no longer young, and it generally leads to concerns that a recession could be lurking. Importance to investors: recessions and bear markets historically go hand in hand.

But is a recession in the next year inevitable? Not necessarily. Optimists, led by Byron Wien, the respected vice chairman of Blackstone, said in his July commentary be believes the current cycle “has at least several more years left to run.”

Bolstering his case, inflation is gradually moving higher but remains low, and wages are up but aren’t accelerating at a fast clip. Both factors are keeping the Federal Reserve from hiking interest rates too quickly. Moreover, fiscal stimulus, including the recently enacted tax cuts, is in the pipeline.

While Mr. Wien’s confidence isn’t shared by all analysts, most short-term leading economic indicators aren’t suggesting a recession will ensue this year or early next year.

Looking ahead and the upcoming election

Last year’s strong rally carried over into 2018 but quickly ran into a brick wall when longer-term Treasury yields tracked higher. The Dow Jones Industrials and the S&P 500 Index have failed to recapture January highs, but the tech-heavy NASDAQ Composite and closely followed measures of mid-sized and smaller-sized companies did set new highs in June (MarketWatch data).

As the month came to a close, escalating trade tensions have hampered sentiment, especially as it relates to large multinationals, whose reach extends around the globe.

An all-out global trade war would constitute a threat to U.S. and global economic growth and counter the economic stimulus from the tax cuts. So far, however, retaliatory actions have been measured.

While difficult to quantify the direct impact, the upcoming midterm elections may be creating headwinds. Yes, economic growth and corporate profits are a big factor in the longer-term direction of stocks, but political uncertainty can sometimes translate into shorter-term investor angst.

A recent study published in the Wall Street Journal found that since the creation of the Dow Jones Industrials in the late 1890s, the oldest and best known of the market indexes has produced “an annualized gain of just 1.4% in the six months before midterm elections, in contrast to a 21.8% annualized return in the six months thereafter.”

The study noted the pattern was not as pronounced during presidential elections. It didn’t repeat itself during non-election years. Of course, these are just averages. Economic and international factors may come into play, and each cycle has its own unique features.

We enter the second half of the year with a modest pullback in global economic momentum, but growth at home remains strong. Corporate profit growth is likely to remain strong this year and moderate in 2019, while low interest rates, and a low level of inflation – at least for now, have helped counter the headwinds created by the ongoing spat in trade. 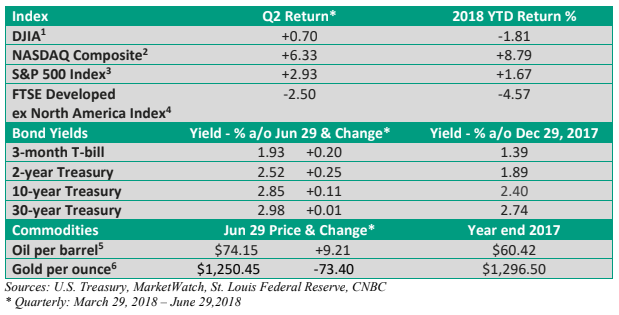