Too Much of a Good Thing? Treasury Yields Rise.

The Federal Reserve is in no mood to raise interest rates. The Fed’s Summary of Economic Projections suggests that its key short-term lending rate, the fed funds rate, could remain near zero through the end of 2023.

The Fed is not worried about inflation and continues to use a wide array of tools, including bond buys and low rates, to encourage economic growth and get people back to work.

Moreover, Congress is intent on passing another large relief package that will include putting more money into the hands of consumers and the unemployed via stimulus checks and an extension of generous unemployment benefits.

Twentieth century film star Mae West playfully remarked, “Too much of a good thing can be wonderful.” But is it?

Interest rates are low, the economy is growing, and there is plenty of cash in the financial system. Further, Congress appears ready to pass another big package.

The combination has supported the economy and helped fuel gains in the stock market. However, Treasury bond yields are beginning to react. Since the Fed is pledging to keep rates low, why are longer-term Treasury yields moving higher as illustrated in Figure 1? 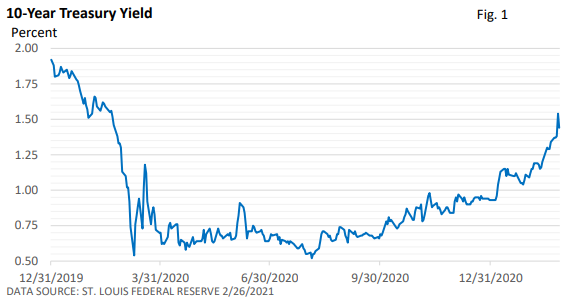 First, the Fed can control short-term rates, but can only hope to influence longer-term yields through commentary by Fed officials and its own guidance. But other factors play a role in long-term yields, too.

1. While uncertainty persists, sentiment suggests that U.S. economic growth will accelerate this year, which reduces the attractiveness of safer Treasury bonds (Treasury yields and bond prices move in the opposite direction). The average 2021 forecast for Gross Domestic Product per a survey of economists by Moody’s Analytics is 6.1%.

2. Investors are beginning to fear that too much fiscal stimulus could push inflation higher, which reduces the appeal of fixed income investments. Money supply growth of 25% last year is the fastest in over 60 years (St. Louis Federal Reserve). It is also raising inflation concerns. It would be the classic case of too much money chasing too few goods.

3. The Fed’s insistence that it will keep short-term interest rates low for a long period may also be lifting inflation fears amid worries the economy could overheat and push up prices.

One gauge investors use to measure inflation expectations is the 10-Year Breakeven Rate, which provides an estimate as to the level of annual inflation investors expect over the next 10 years.

While a rate near 2.25% signals that inflation expectations have not become unanchored, the level has been rising, recently hitting a 6 ½ year high—see Figure 2. 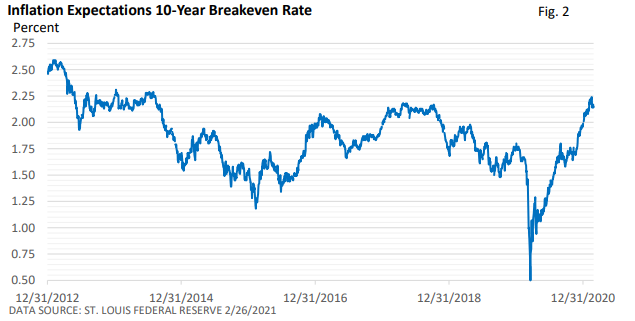 While the rate of inflation probably has an upward bias this year, that doesn’t mean an unwanted rise in prices is on the horizon. Besides, accurately forecasting inflation over the long term is dicey at best since the inflation-forecasting equation has many moving parts.

Yields on corporate bonds have risen at a more modest pace so far. And both corporate and Treasury yields remain at an historically low level.

In some respects, the rise in Treasury yields is a sign of confidence in the economic outlook. But investors are also trying to discount an uptick in inflation amid a very easy monetary policy and very generous government stimulus.

Ultimately, the path of the pandemic will probably have the biggest influence on the economy. Uncertainty remains, but new vaccines and the decline in new cases are cautiously encouraging.