Last month’s commentary opened with a summary of the number of daily all-time highs recorded by the S&P 500 Index3 – 50 closing all-time highs this year (LPL Research, St. Louis Federal Reserve) through October 31. We can add seven more now that November has come to a close.

Shorter term, improved odds the GOP tax bill will squeak through the Senate fueled gains at month end. But let me quickly add the bill still has hurdles that must be cleared before becoming law. Longer term, it’s still all about the economic fundamentals.

November’s commentary also highlighted more upbeat prospects for the U.S. economy. But that is only part of the narrative. To paraphrase the late Paul Harvey, “Now it’s time for the rest of the story.” And one that has an international flair.

“Growth in Global Economy is Robust,” said a November 29th story in the Wall Street Journal.

The Journal referenced the latest economic outlook provided by the Organization for Economic Cooperation
and Development (OECD) – an international group made up of 35 countries, including the U.S.

This year we’re seeing growth accelerate in the U.S., Europe, China and Japan, according to OECD data. While challenges remain, “Global growth is projected to improve slightly in 2018, but remain below the pace of previous recoveries,” the OECD said.

But let’s take a moment to dive a little bit deeper. Yes, it’s a brief dive into the weeds, but it illustrates an important point.

Figure 1 offers a great summary of what’s transpiring globally. Figure 1 illustrates whether fixed investment is rising or falling in 45 countries. A quick side note is in order: Fixed investment is a wonky term that primarily refers to spending by businesses on buildings and equipment.

The expansion or contraction in spending by businesses is significant because it is an important driver of economic growth. We see that spending plummeted during the 2009 recession. That’s not a surprise.

We also see a rebound as the global economy exited the recession. But heightened uncertainty following the financial crisis limited the economic upside, that is, until late last year (IMF data). 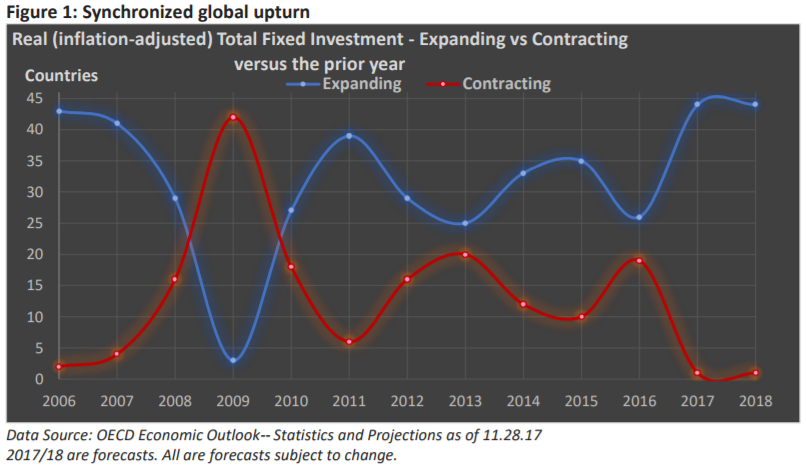 Currently, all but one country is expected to exhibit growth in 2017 and 2018. That’s impressive.

Okay, I get it. That was a wonky way of saying that prospects around the world are improving, but I felt it was important to use an obscure piece of economic data to graphically demonstrate the big picture.

From a more practical standpoint, faster global growth is translating into faster revenue and profit growth for U.S. companies that have more worldwide exposure – see Figure 2. 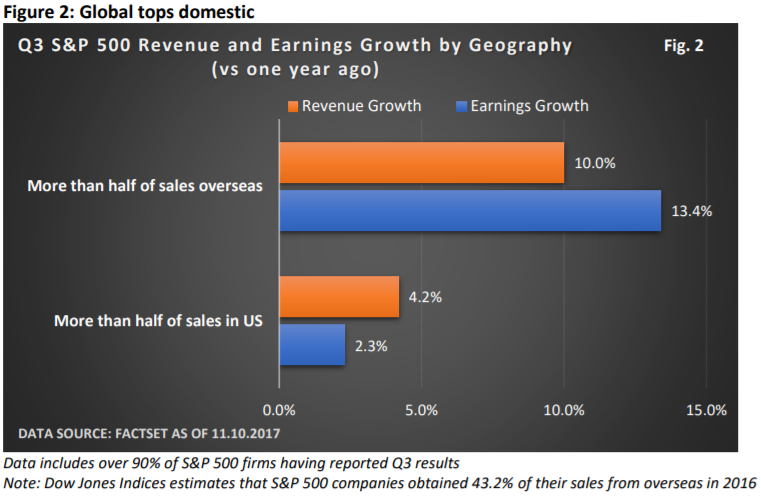 Figure 2 also offers us two takeaways. First, a thriving global economy creates a tailwind for earnings, which supports stocks. Second, the synchronized acceleration in activity around the world is a major factor in the upbeat performance of international stocks this year.

While we should never forget that unforeseen events have the potential to inject volatility into the market, including failure of tax reform, the economic fundamentals, both at home and abroad, have lent support to shares.