August can be hot and muggy and it leaves one pining for a fresh autumn breeze. Since 1970, August has, on average, been a lackluster performer for stocks (St. Louis Federal Reserve S&P 500 data). Last month was no exception – hot and muggy.

While August’s historically weak numbers are difficult to explain (September is the weakest), last month’s volatility and modest selloff can be traced to a couple of factors: escalating trade tensions with China and rising concerns about the global economy.

Last month, President Trump upped the ante in the trade war with China. Not surprisingly, China retaliated, and the U.S. responded in kind. But what might be the president’s strategy?

China has benefitted from the status quo for over 20 years. China has had no incentive to change its behavior.

Its economy has grown rapidly, in part, due to its ability to sell cheap goods to U.S. consumers. It has also obtained technology via theft and forced technology transfers from its U.S. partners doing business in China.

Up until now, China has had no incentive to play by the rules. Why should it? Crime pays.

There’s a new sheriff in town

Agree with his methods or not, Trump’s goal has been to change the calculus by ratcheting up pressure on China so that the status quo becomes increasingly painful. It’s a high risk/high reward strategy designed to level the playing field.

While China can ill-afford slower growth, Chinese retaliation comes at a price – volatility in financial markets and higher costs for U.S. businesses and consumers.

How long volatility may last is anyone’s guess. Sometimes, a well-timed conciliatory statement or tweet from the president sends stocks higher.

Will economic pain force China to negotiate in good faith? Or, will China wait out the 2020 election? Both sides are feeling the heat, and China is being incented to deal. 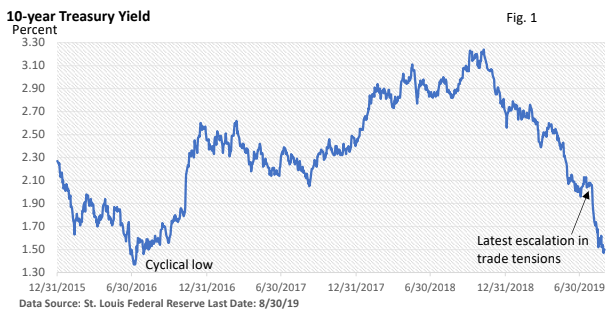 Today, inflation is low, the global economy has slowed, the Fed is cutting interest rates and global bond yields have tanked. All of these factors have attracted cash into longer-term U.S. Treasuries (bond prices and yields move in the opposite direction).

Further, rock bottom yields are creating anxieties that the Treasury bond market is telegraphing a recession.

Yet, there may be exogenous factors that are pressuring yields at home.

There is over $15 trillion (yes, trillion – that’s not a typo) in government debt around the world that yields less than zero (Bloomberg). That’s right, you’ll receive less than your investment if held until maturity.

In comparison, U.S. Treasuries are attractive and may be drawing overseas cash, which artificially depresses yields at home.

By itself, shorter-term volatility isn’t unusual. We see it from time to time when heightened uncertainty creeps into sentiment.

As I’ve said before, control what you can control – the financial plan. Much goes into crafting your plan. While it can be tweaked and it doesn’t eliminate risk, it helps manage risk, and it is designed with both up and down economic cycles in mind.

Ultimately, it is also designed with your financial goals in mind.