The same headwinds that have clouded the economic outlook and the investing landscape remained in place as the calendar shifted from September and moved into October.

But that didn’t prevent the Dow Jones Industrial Average from turning in its best monthly performance since 1976, according to Barron’s.

Notably, market action this year followed a typical seasonal pattern—weakness in September and strength in October, according to S&P 500 data from the St. Louis Federal Reserve.

Three factors did most of the heavy lifting last month:

Another jumbo-sized rate hike is expected in November, but some folks at the Fed may want to slow things down and assess the economic impact of prior increases.

Nonetheless, inflation has yet to ease—see Figure 1. 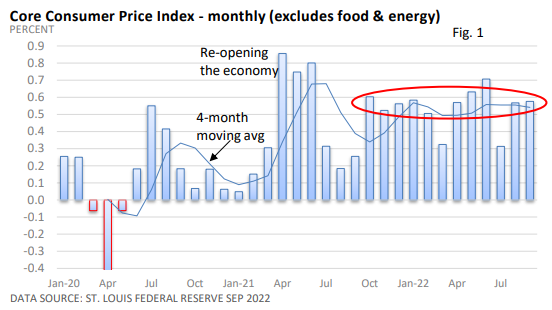 Meanwhile, Gross Domestic Product (GDP), which is the largest measure of goods and services, rebounded in Q3 following declines in Q1 and Q2 (Figure 2). 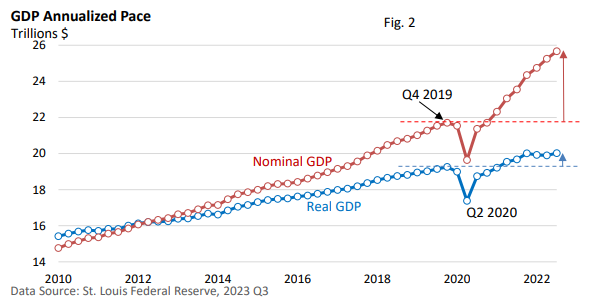 Note how nominal (non-inflation adjusted) GDP has surged while real (adjusted for inflation) GDP has been nearly flat over the last four quarters. This means that the volume of goods and services moving through the economy has been almost flat (real GDP), as price hikes drove the total value of output (nominal GDP).

While GDP is an important quarterly report, it is backward-looking. In this case, July through September. We’re in November.

Investors attempt to price in economic events anywhere from six to nine months in the future.

Housing, which is an important leading economic indicator, is in a recession thanks to the stratospheric rise in mortgage rates.

The Leading Index, which consists of 10 economic reports that tend to presage economic activity, has dropped in six of the last seven months, according to the Conference Board.

The Leading Index has a perfect record of calling recessions over the last 60 years, but nailing the onset of a recession is not its strong point

Historically, the fall typically marks a stronger seasonal period for stocks, according to the Stock Trader’s Almanac. The midterm elections could also bring some much-needed clarity.

Still, the economic fundamentals that have contributed to today’s bear market have yet to unwind.

But, as we’ve said before, no one rings a bell when a bear market ends. Investors seek out trends before they explicitly show up in the economic data. A durable market bottom will likely occur before the current trend shifts.