Have you ever watched a movie or read a book that put you to sleep? One word – boring. It’s a rhetorical question, as all of us have been subject to a plot that failed to inspire.

Well, something similar has been happening to much of the stock market.

An end-of-June Wall Street Journal story started out this way. “Stock market volatility is near an all-time low…”

On June 9, CNBC.com reported that one key measure of volatility fell to its lowest reading since late 1993. That low came just after former FBI Director James Comey’s much-anticipated testimony before a Congressional committee. Viewed through the narrow lens of the market, investors just didn’t care.

But boring shouldn’t necessarily be viewed negatively. The Wall Street Journal also pointed out that several major global indexes had their best first-half performance since 2009.

We also see the lack of downside action in the weekly movements of the broad-based S&P 500 Index, which is a measure of 500 large U.S. companies. 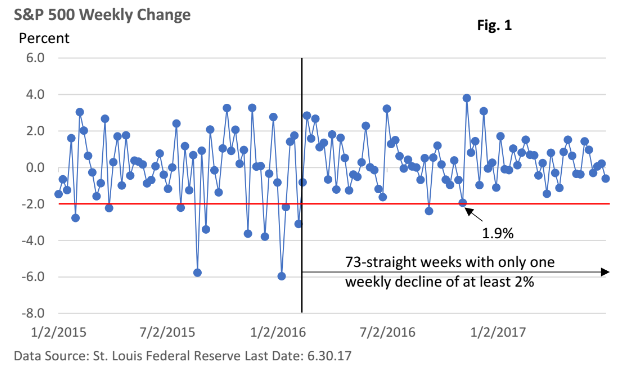 There have been several reasons for the complacency, including an economy that isn’t rocking the economic boat, an expanding global economy, a Federal Reserve that continues to signal gradual rates hikes, and global central banks that remain in a very accommodative mode (though the European Central Bank has hinted it may eventually shift gears).

One other reason—the lack of stress in the financial system.

Financial stresses became a big issue in the 2008 financial crisis, when credit market seized up and lending among banks and other institutions nearly broke down.

In the aftermath of the crisis, arguments arose over how to monitor developments in the financial markets.

One tool is the St. Louis Fed Financial Stress Index©. It’s hardly a household name, but it is designed to measure stresses that may be building in the financial system.

It is a compilation of 18 weekly data series, including those that measure lending in the credit markets, volatility of stock prices, and how investors view risky debt such as junk bonds.

As highlighted in Figure 2, conditions are quite easy and are near the lowest levels seen since the recession ended.

There are a number of contributors to today’s “relaxed” mood in the credit markets.

Few leading indicators point to a recession at home, corporate profits are rising, and the Federal Reserve is boosting rates at a gradual pace.

In addition, investors aren’t very concerned about weak spots overseas, including some of the troubled economies in Europe and emerging markets.

Some will argue that complacency precedes volatility, and a more serious downturn in stocks is eventually inevitable.

We have experienced four downturns in the S&P 500 that were greater than 10% since 2010 per St. Louis Fed data. However, in the context of an expanding economy, stock market corrections have historically been viewed as temporary and healthy for the market. That has been the case for such downturns since 2010.

Some will say valuations may be a bit extended, especially in some high-flying tech stocks. However, successfully timing a selloff and re-entering shares near the bottom is a feat that is rarely successful.

Think of it this way. Predicting stock market turns is akin to predicting a fumble in a football game. You know it’s an inevitable part of the game but even a well-respected sports commentator would come up short trying to call such an occurrence.

Long-term investment plans, i.e., a financial roadmap, take unexpected detours into account. Markets never move up in a straight line, but those who try to successfully time the ups and down in stocks rarely find such moves to be profitable over the longer run.