Most have heard the question, “Is too much of a good thing, still a good thing?” Early in the year, Treasury bond yields were rising in reaction to congressional generosity. You know, trillions and trillions of dollars of stimulus cash being pumped into the economy.

The cash has aided the economic recovery, and stocks have reacted favorably. Today; however, too much money is generating a new concern: inflation.

The core Consumer Price Index (CPI), which excludes food and energy, rose at its fastest monthly pace in 40 years, up 0.9% in April—see Figure 1. Add food and energy into the mix and the CPI increased a worrisome 0.8%. 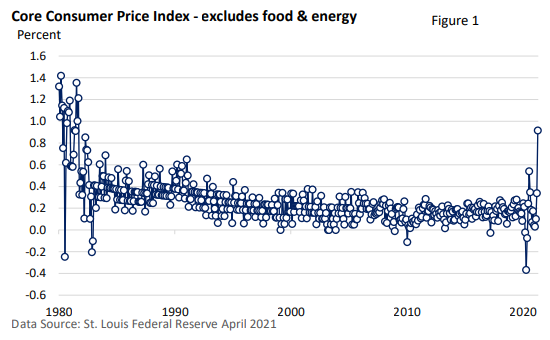 Admittedly, inflation worries have popped up before. Inflation Rears Its Ugly Head Once Again was a March 2008 Wall Street Journal headline.

Today, economists are debating whether the recent flare-up is temporary and tied to the reopening of the economy and pent-up demand or something more ominous that would eventually force the Federal Reserve to jack up interest rates.

Fed officials have repeatedly insisted that today’s jump in prices is “transitory,” their preferred word of choice. What does transitory mean? It simply means temporary.

That may turn out to be the case, but let’s dig a little bit deeper. Policymakers are finding out that it is easier to fuel the demand side of the economy (consumers and businesses buying goods) than get the productive side of the economy, which generates that supply of goods, back on its feet.

Using a very broad overview, Figure 2 helps explain what’s happening. The demand for goods has surged thanks largely to fiscal stimulus, but the production of goods has lagged badly. 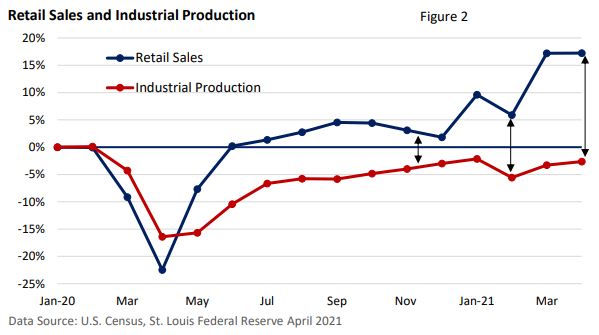 Imports have made up some of the difference, hitting a record high in March per U.S. Census data. Still, a tight supply of some goods is pushing up prices. It’s the classic case of supply and demand as the economy reopens.

Or here is another look from a May 11th CNBC feature: U.S. Faces Major Shortages in Everything from Labor to Semiconductors, Lumber, and Packaging Material.

Problems are especially acute in housing.

The National Association of Homebuilders said that lumber shortages are leading to skyrocketing lumber prices, adding an average of $36,000 to the cost of new home in one year.

Where might we be headed? Congress is debating infrastructure and big new spending bills. There is still plenty of fuel in the tank to support consumer spending, and the Fed insists its easy money policy won’t be changed anytime soon,

Further, it is unknown when supply-side bottlenecks might clear or whether labor shortages may fuel wage increases that get tacked on to retail prices.

Yet, disinflationary demographic trends that predate the Covid crisis remain in place. The same could be said of globalization, though less so than in recent years. Plus, labor unions no longer have the power to exact inflationary wage hikes as they did in the 1970s.

Besides, a burdensome rise in inflation would probably be met by a quicker response from the Fed than what we saw a generation ago.

Inflation is not a four-letter word, but it might as well be. A repeat of the 1970s is an unwanted outcome. However, the low inflation of the last decade is unlikely to be matched over the medium term.