October has a ghoulish reputation. Maybe it’s the October 1929 market crash or the one-day decline in October 1987 that exceeded 20%. Using data from the St. Louis Federal Reserve that goes back nearly 50 years, September has historically been the worst month for stocks.

There isn’t a plausible reason that might explain weakness in September, but this year, September saw new highs.

The Dow Jones Industrials, which is made up of 30 large companies, topped its January 26th high late last month. The S&P 500 Index, which is comprised of 500 large companies, pushed past its prior peak in August, added to its advance in September, and registered its best quarter since 2013 (CNBC). 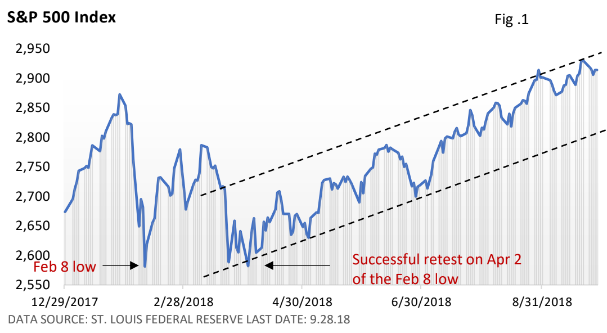 Shorter term, risks never completely abate. Problems in developing markets are simmering, and we’ve been treated to a steady drumbeat of discouraging headlines on trade with China.

On September 18, the U.S. confirmed that tariffs on another $200 billion in Chinese imports will go into effect. China promptly slapped tariffs of $60 billion on U.S. exports. Market response: the Dow closed up 184 points that day (WSJ).

Retailers have begun to loudly complain that tariffs will boost prices. At a late September press conference, Fed Chief Jerome Powell said he’s “been hearing a rising chorus of concerns from businesses all over the country about disruption of supply chains, materials, cost increases, and loss of markets.”

But he was quick to point out that if you look at the data holistically, “It’s hard to see much happening at this point (slowing the U.S. economy).” That’s likely why investors aren’t fretting over trade frictions right now.

Maybe investors are underestimating the longer-term negative impact. That said, when new risks have failed to materially dent the economic outlook, investors refocused on the fundamentals.

It’s the upbeat economic data, rising corporate profits, and still-low interest rates that have helped push shares to new highs. This has been an ongoing narrative absent new headline risks.

Rates, the Fed, and new highs

Rates are no longer at rock-bottom levels as they were in the years that followed the 2008 financial crisis. Since the Federal Reserve began hiking interest rates in late 2015, the Fed has raised the fed funds rate eight times. Each hike has been in 0.25 percentage-point increments. Today, the target range for the fed funds rate is 2.00-2.25% – see Figure 2.

According to the Fed’s own projections, expect one more increase at the December meeting. The goal: slowly normalize interest rates without tipping the U.S. economy into a recession. But, raise rates too slowly in the face of solid economic growth and the Fed risks overheating the economy and lifting inflation.

When the Fed was about to begin lifting rates, some analysts worried it would be bad for stocks. A higher guaranteed return could diminish the appeal of equities. 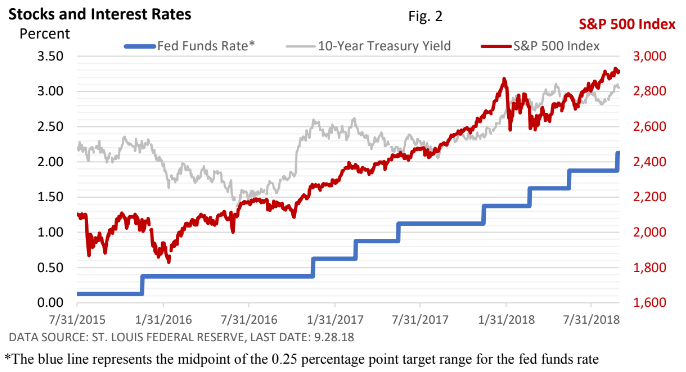 You see, other factors also influence the overall level of closely-followed market indexes. The improving economy has played a significant role in lifting corporate profits, which has the biggest long-term influence on stock prices. 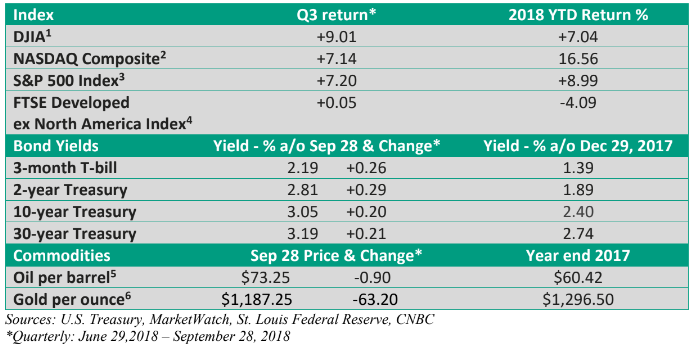 We can’t discount the possibility that unexpected headlines could sway sentiment and create volatility.
We’ve seen it before.

A favorable outlook for profits is no guarantee stocks will be higher next month or by the end of the year. But strong fundamentals – rising corporate profits, solid economic growth, and still-low interest rates – have underpinned shares in the second half of the year.