Climbing a Wall of Worries to New Highs

The S&P 500 Index has risen 12.53% since the beginning of the year – pretty impressive. The S&P 500 not only ended the quarter at a record high, it extended its quarterly winning streak to eight-straight quarters (MarketWatch data). As far as September’s reputation for being a weak month, it didn’t happen.

It’s not uncommon to hear some folks credit this year’s runup to the performance of a few large stocks. You see, the S&P 500 Index is what is called a “market-capitalization” weighted index. That simply means that the larger stocks in the 500-company index have a greater influence than the smaller ones. So, strong gains by some large companies are driving most of the returns. Right?

I recently came across a mid-September commentary by Blackstone that pointed out an equal-weighted version of the S&P 500 is up over 8% (at quarter-end, it’s up 10.38% year-to-date, per S&P Dow Jones Indices).

(The equal-weighted S&P 500 Index is an unmanaged index of 500 larger companies which cannot be invested into directly. The index includes the same firms as the capitalization-weighted S&P 500, but each company is allocated a fixed weight of 0.2% of the index at each quarterly rebalance. Past performance does not guarantee future results.)

In other words, the good cheer from this year’s bull market isn’t concentrated in just a few large stocks.

What’s interesting, and is surprising to some, is the continued lack of volatility in the market. Political gridlock in Washington hasn’t had much of an impact on investor psychology. The same holds true of rising tensions with North Korea and the devastating hurricanes that slammed into Texas, Florida and Puerto Rico. 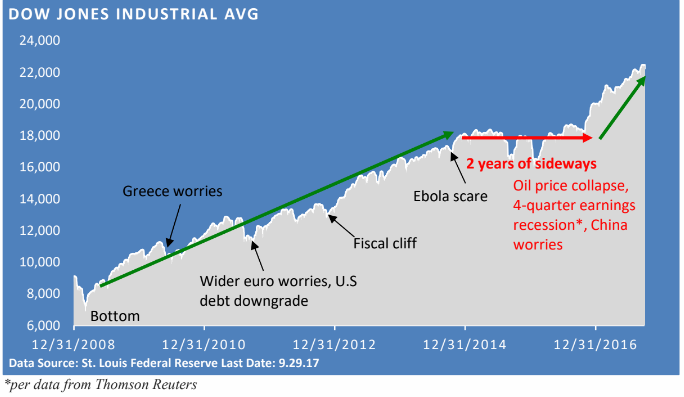 Recall the jump in shares immediately following the election. Republicans controlled the White House and Congress.

Investors quickly seized the bullish reins amid expectations that tax cuts were a given, infrastructure spending and a ramp-up in defense spending would soon be in the pipeline, and pro-growth deregulation would be forthcoming. Think of it as a sugar and caffeine cocktail for economic activity.

Trump acted on the deregulation front, but the rest of his agenda seems to be mired in a quicksand known as Capitol Hill.

The rhetorical volley between North Korea and the U.S. has been unsettling, and more is likely forthcoming.

Prepare yourself for that. But it hasn’t had an impact on the U.S. economy.

Moreover, investors are beginning to price in the unpredictability of North Korea’s rogue leader. Taken together, a more meaningful market reaction has been lacking. Without a significant increase in tensions, recent history suggests market impact will likely remain limited.

Lastly, Hurricanes Harvey, Irma and Maria have devastated local communities. While relief efforts are under way and I encourage you to consider donating, the longer-term effect on the U.S. economy is likely to be minimal. Shorter term, it is affecting the data and gasoline prices are up, but rebuilding efforts are likely to lend support in the months ahead.

That said, Republican Congressional leaders and Trump released a blueprint for tax reform at the end of September, but it must wind its way around many Congressional hurdles before it can be enacted into law.

Keep an eye on the fundamentals

What’s been happening in Washington and North Korea has been barely more than a distraction for investors, as faster economic growth at home and overseas has lifted earnings.

In addition, interest rates remain near historic lows, which reduces competition with stocks. It’s been a powerful tonic that has kept volatility and the bears at bay.

As September came to a close, the Trump administration unveiled its long-awaited plan to reform the tax code.

The plan is simply an outline, a blueprint that was the byproduct of negotiations between Trump officials and key Republican Senate and House leaders. It’s a framework that is likely to undergo several iterations as it winds its way through the House and the Senate.

With Congress tied to a tight schedule, details may not be finalized until early 2018, if then.

From an investment perspective, the outline was silent in regards to how it will treat dividends and capital gains. In addition, no mention was made of the 3.8% surtax on investment income that hits high-income Americans.

Retirement accounts could undergo changes. There has been some chatter about shifting retirement vehicles toward “Roth-style” accounts, which would eliminate the upfront deduction to income. But at this juncture, anything beyond that is simply speculation.

From a business perspective, the outline lowers the top corporate rate from 35% to 20%, which has been highly coveted by investors. It also allows for a top rate of 25% on business income. But specific language has yet to be written.

Simply put, tax planning becomes extremely tenuous given the high degree of uncertainty. If you have any questions or concerns, I’d be happy to discuss them with you. I’m just an email or phone call away.