The Federal Reserve has hiked the fed funds rate three times since it first raised its key lending rate over a year ago. And a closely watched gauge from the CME Group that measures rate-hike sentiment puts odds of a June increase at 95% as of the last day of May.

Sure, we’ve seen T-bill rates rise modestly and some money funds and CDs have ticked higher, but savers aren’t seeing rates anywhere near where they were before the 2008 financial crisis.

There are several reasons why yields haven’t risen much, and we can lay the blame on domestic as well as global markets.

The Federal Reserve has lifted rates but remains very cautious and continues to promote a gradual rate-hike trajectory.

But it isn’t just the Fed. While the U.S. central bank has begun to tighten, major banks such as the European Central Bank and the Bank of Japan continue hold their key rates at or below zero for short-term loans.

Further, neither bank signaled it may soon shift policy.

You see, central banks play an important role in what happens to rates, both in their own countries and in the U.S.

With the U.S. 10-year Treasury above 2%, investors overseas looking for a safe place to park cash can easily boost their yield by buying U.S. bonds, which helps keep a soft lid on U.S. yields (bond prices and yields move in the opposite direction).

Long-term bondholders are wary of any whiff of inflation. If the rate of price hikes were to jump, they could easily be stuck in a low-yielding bond whose annual payout doesn’t keep pace with inflation.

But inflation, as measured by the Consumer Price Index and the lesser-known PCE Price Index, remains very low.

The left-hand side of Figure 1 illustrates the 10-year yield is off last year’s low, but it has dropped about one-third of a percentage point from its recent high. 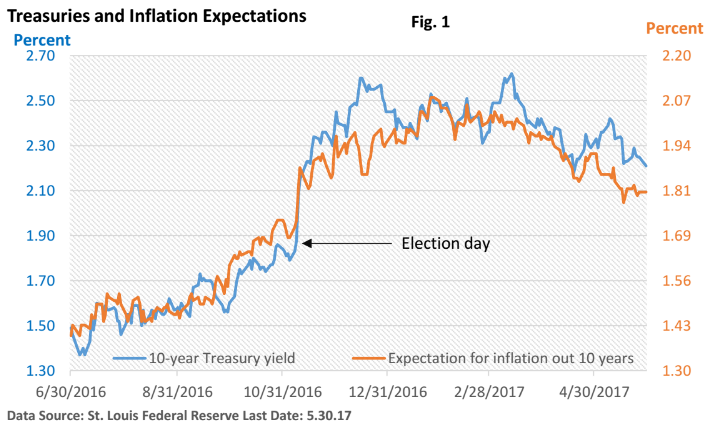 A U.S. expansion that just can’t get out of second gear

Not only is weak economic growth a headwind to higher inflation, it acts like a magnet for U.S. Treasuries.

If growth were much faster, we’d likely see funds flow out of Treasuries and into more productive investments.

A flight of capital away from U.S. Treasury bonds would drive yields higher. Remember, the price of bonds and the yield move in the opposite direction.

Jump down to Figure 2. It tracks the growth of Gross Domestic Product (GDP), which is the broadest measure of activity for the economy, and compares it with the yield on the 10-year Treasury bond. 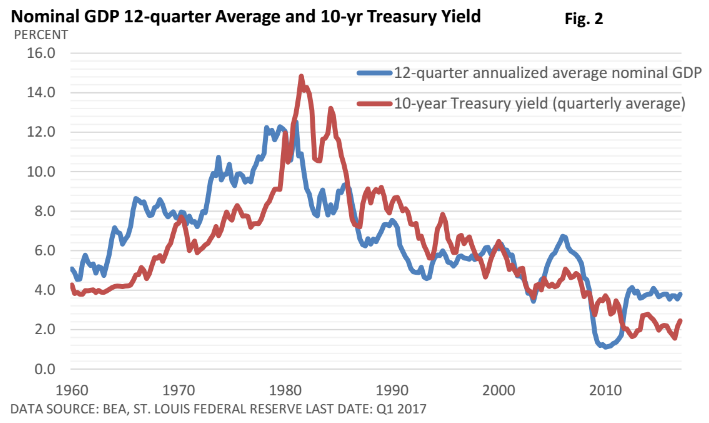 Nominal GDP calculates GDP based on current prices. Real GDP, which is how it is typically reported in the media, filters out inflation.

Figure 2 illustrates that the 10-year yield loosely tracks nominal GDP. Put another way, subpar GDP has been a headwind to higher yields.

Currently, nominal GDP might suggest the 10-year yield should rise. But remember, yields around the globe are low, central banks outside the U.S. are in no mood to raise interest rates, and the Fed continues to signal any rate hikes are expected to be gradual. 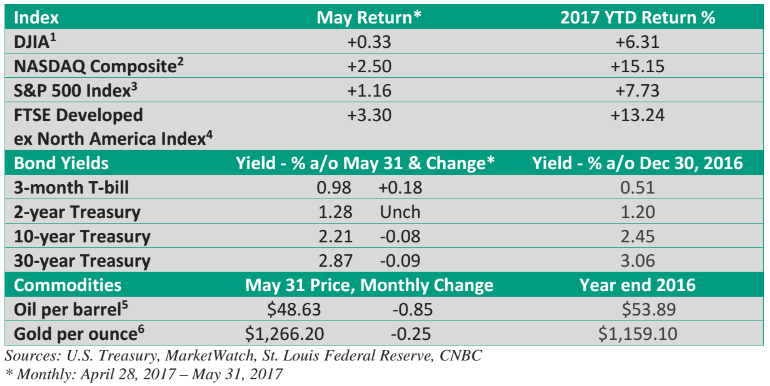 Bottom line—there are technical factors that also influence the daily inflows and outflows out of bonds.

While volatility in rates can’t be ruled out, the major influences on today’s low-rate environment have yet to abate.