January came in like a lion. The broad-based S&P 500 Index registered 14 new closing highs while the Dow racked up 11 (St. Louis Federal Reserve). It’s an impressive start to the new year, but I believe it’s fair to say that the current pace is not sustainable. 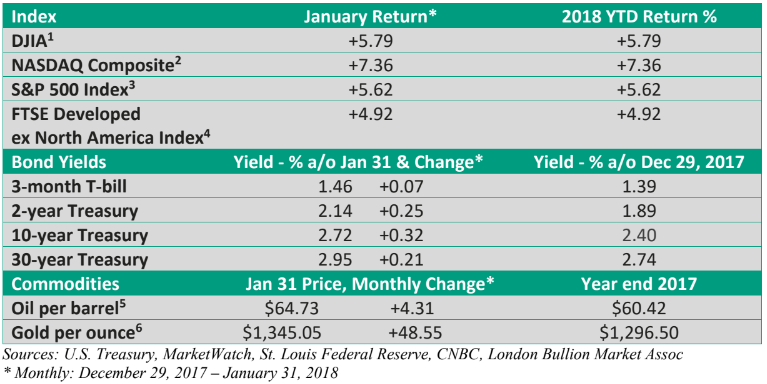 Many of the factors that have supported stocks over the last year remain in place, including solid economic growth at home and overseas, an acceleration in profit growth (Thomson Reuters), still low interest rates, and low inflation as measured by the Consumer Price Index.

A remark in last month’s newsletter…

… did not materialize in January.

But the upward lurch in stocks was primarily driven by the dramatic reduction in the corporate rate from 35% in 2017 to 21% this year and beyond, in my view.

The chart below illustrates the almost unprecedented rise in quarterly profit estimates by analysts – Figure 1.

I’ll explain. Analysts were estimating an already-strong 12.2% increase in Q1 2018 S&P 500 profits on January 1 (Thomson Reuters). By month’s end, analysts had raised their forecast to 17.2%. That’s an astounding 5-percentage point increase in earnings estimates in just one month. 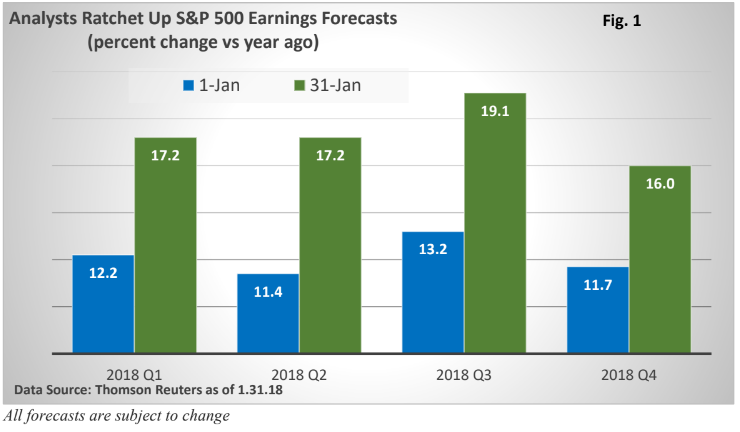 And we’re not simply witnessing the increase in Q1. It’s across the board.

With analysts sharply hiking profit forecasts, investors quickly priced in a much rosier earnings outlook. Hence, the sizable gains in stocks we saw as the year began.

Legendary investor Warren Buffett summed it up this way in a CNBC interview in the middle of last month. He called it the equivalent to a “silent shareholder,” in this case the U.S. government, giving up a claim to profits to other shareholders.

“You had this major change in the silent stockholder in American business, who has been content with 35%…and now instead of getting a 35% interest in the earnings (he noted foreign earnings from U.S. firms are more complicated) they get 21% and that makes the remaining stock more valuable,” he said.

Of course, one could ask – are analysts overestimating the impact from tax reform? Probably not, but it’s an open question because we haven’t had business tax reform of this magnitude in over 30 years.

One cloud on the horizon

Stocks may not be priced for perfection, but they are priced for many positive events. It leaves less room for disappointment.

As stocks have surged in January, we’ve experienced an upward creep in bond yields.

In particular, the 10-year Treasury bond is reacting to the possibility that inflation will gradually accelerate this year, economic growth will continue at a solid pace, and global central banks may become less accommodative. Note: Treasury bonds have historically performed well in low-inflationary, low-growth environments (bond prices and bond yields move in opposite directions).

A rise in the 10-year yield to its highest level in almost four years created modest jitters in shares as the month ended – see Figure 2. 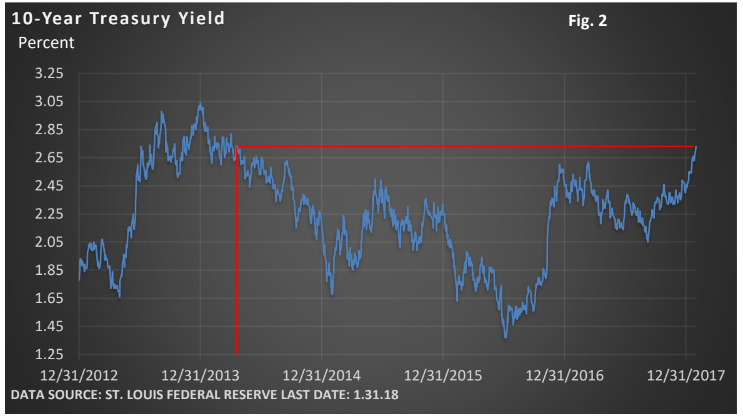 It’s a reminder of something we already know—markets can experience bouts of volatility. Since 1950, the average intra-year pullback in the S&P 500 has been 13.6%, with 91% of intra-year declines of at least 5%, and 54% of at least 10%, according to LPL Research.

It’s simply a reminder that markets, which have a longer-term upward bias, do experience turbulence.