The Shifting Winds of Sentiment

Market sentiment can be fragile. There are times when there is unbridled enthusiasm. Then, we may get a change in a key metric, and it’s as if everyone who was on one side of the boat runs to the other side.

In a way, that’s what happened when investor sentiment shifted between January, when shares were hitting new highs, and early February, when investors turned the tables.

If we look to the economy, nothing much has really changed. Sure, the winds of protectionism whipsawed sentiment earlier in the year, and tensions haven’t dissipated. But first quarter profits came in much better than expected (Thomson Reuters), and the jobless rate fell to 3.8% in May (U.S. BLS).

If we’re basing the outlook on the economy and profit growth, the fundamentals are sound.

Over the last month, larger company stocks have stabilized and moved away from recent lows. It’s another shift in sentiment.

It’s been even brighter for smaller-company stocks, with a key index hitting an all-time high in late May, according to MarketWatch.

There are times when it’s difficult to pinpoint the exact reason why shares drift in a particular direction. When investors implement buy or sell decisions, there isn’t a space on the ticket entitled, “reason for stock transaction.” But we can scan the investment landscape for signs.

Like a detective solving a riddle, we can gather clues and reach a reasonable hypothesis. For starters, investors appear to be adapting to the idea of a 10-year Treasury yield around 3%. The growing economy, which supports corporate profits, helps to offset any headwinds from higher rates.

Company stock buybacks, or companies that repurchase their shares on the open market, jumped to a record pace in Q1 (Figure 1). That’s expected continue in the current quarter (S&P Dow Jones Indices).

Additionally, legendary investor Warren Buffett said in a CNBC interview in early May that he was actively buying stocks in the first quarter.

It’s not that Mr. Buffett can’t make a mistake. He can as no one is infallible. Buffett has repeatedly said he doesn’t try to time the market, but an investor of his stature, and one whose long-term record of success speaks for itself, provided a degree of comfort and soothed anxious nerves.

Meanwhile, smaller companies don’t have as much international exposure, reducing potential damage from rising tariffs. Reduced exposure overseas limits any headwinds from the recent rise in the dollar.

As the winds of sentiment shift, it’s a good reminder that longer-term investors should be careful about being bounced around by short-term changes in investor psychology. Market timing is rarely a successful strategy.

As the end of the month approached, a hiccup in Italy created tremors that reverberated through global markets.

First, a little bit of background – Europe has been dealing with various banking and financial problems since the beginning of the decade. We’ve seen flare-ups in Greece, Spain, Portugal and Cyprus. A couple of years ago, markets grappled with the short-term fall out when U.K. voters decided to exit the European Union, i.e., Brexit. Over the last year, faster growth in Europe has pushed anxieties to the backburner.

Over the Memorial Day weekend, the president of Italy rejected the appointment of the finance minister from the newly elected coalition government because of a perceived bias against Italy’s use of the euro as its currency. The newly chosen prime minister (not to be confused with the president) abruptly resigned.

While attempts are being made to salvage the current coalition, new elections can’t be ruled out.

The reaction in Italian bonds was swift, with yields surging (Bloomberg), while global markets temporarily took it on the chin. The overriding concern – Italy could dump the euro.

Unlike Greece, Italy is the eurozone’s third-largest economy. Though its debt is high, it’s not in need of a bailout as was the case with Greece. But a rejection of the euro would have huge ramifications in Italy. Cash would likely flee the country, collapsing Italian banks and roiling the European financial system.

It’s an unpleasant prospect, but rejection of the common currency is not something voters in Italy have been clamoring for. Cooler heads quickly prevailed.

The economic consequences strongly suggest that odds Italy will reject the euro are low. But the latest drama is a reminder that Europe’s financial struggles are simmering near the surface. At times, tensions in Europe can create volatility in U.S. markets.

Housing reclaims a prior peak

For some cities, home prices have been in record territory for quite a while. But this marks the first time a key measure of U.S. prices has surpassed the 2006 peak – see Figure 2 blue line. It took almost 12 years. 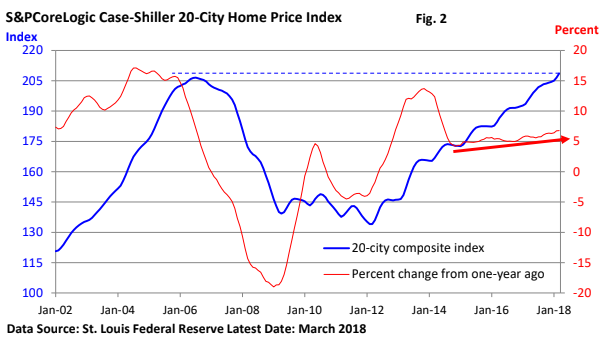 Unlike the prior decade, when speculators and easy lending standards helped create a buying frenzy that fueled price increases and home building, conditions are different today.

Underwriting standards are stricter and home builders have been reluctant to build smaller, starter homes. In some locales, bidding wars have broken out, especially at lower price points. Additionally, price increases (red line, Figure 2) have been reasonably steady. Gone are the days when prices were marching up at unsustainable, double-digit rates.

While rising mortgage rates could slow the housing market, today it is more about the lack of supply, as noted by statistics from the National Association of Realtors.

The lack of supply has created a challenge for buyers and has impeded sales in some markets. But overbuilding, which has historically been a prerequisite for a bubble, isn’t a problem right now. The problem in many markets is a lack of available homes for sale.