Historically, September has not been kind to investors. Using S&P 500 data over the last 50 years, September ranks dead last, with an average return of -0.73% excluding dividends.

Since 2010, the S&P 500 Index’s return has been negative six times, including last month, which saw the broad-based index decline by 4.8%. 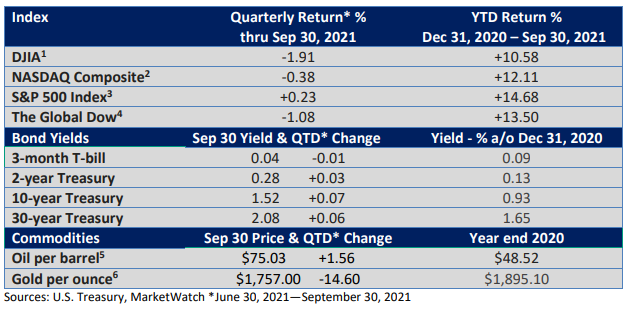 But the third quarter started out on a firm note, with gains continuing through August. As we’ve seen for much of the year, economic growth, very strong profit growth, and low interest rates have fueled the market’s spectacular rise.

Since the new bull market began in late March 2020, the S&P 500 Index has yet to fall by 10%, which would be considered a correction—see Figure 1.

While we have had selloffs this year, they have been short-lived. We have yet to see a pullback greater than 5%, until now (Figure 1). Still, a 5% pullback is modest. 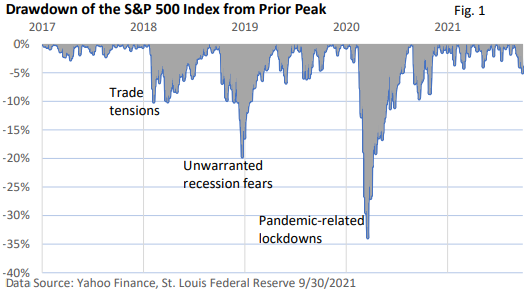 We’re due for some type of consolidation, but timing a correction and correctly calling the bottom (and doing it consistently) is a feat few, if any, have mastered.

Bottlenecks, the Fed, and the economy

Last month, uncertainty crept into market sentiment. On the inflation front, much can be blamed on strong demand for consumer goods and a supply chain that cannot keep up. And Covid-related bottlenecks and supply disruptions aren’t going away quickly.

Fed Chief Jerome Powell had been optimistic that supply constraints would be temporary, but he conceded last month that inflation has been “frustrating” and believes it will run into 2022.

“It’s also frustrating to see the bottlenecks and supply chain problems not getting better — in fact, at the margins, apparently getting a little bit worse. We see that continuing into next year probably, and holding up inflation longer than we had thought,” he said.

Blown inflation projections aside, we can take some solace that outsized gains in a few items have primarily driven up the Consumer Price Index (CPI), per U.S. BLS data.

The rate of increase for services are within their long-term range. But consumer goods have sped up amid global supply chain issues and tight supplies of key raw materials (Figure 2).

We not only see it in the graphic, but a slew of companies have also acknowledged the problem in their quarterly earnings reports.

Further, a slightly more hawkish tilt by the Fed also leaned on sentiment, with central bankers now hinting a rate hike could come by late 2022, per its quarterly projections.

Meanwhile, economic growth is slowing more quickly than expected, as stimulus fades and labor shortages and supply chain disruptions take their toll. For example, the semiconductor shortage has been especially acute for automakers. 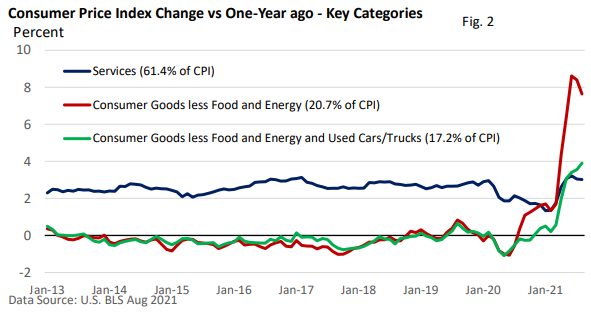 Separately, the debate on raising the debt ceiling is causing jitters. The government will lose its ability to borrow by October 18, according to the U.S. Treasury Dept. A default on U.S. Treasuries has never occurred.

It’s a very unlikely event, but it would have a detrimental impact on financial markets and the economy if Congress fails to raise the debt ceiling.

Finally, we’re seeing problems surface in China’s real estate market. Such problems may stay contained to China, but they made headlines last month.

The jump in Covid cases is having some effect on the economy. More recently, however, CDC data shows that new cases have slowed. Let’s see how this plays out later in the fall.

Yet, let’s not get too pessimistic. Stocks have surged over the last year. Short-term traders are looking for reasons to step back, and hurdles that surfaced last month provided a good excuse.

While any number of short-term issues can create volatility, the economic fundamentals, growth and low interest rates, cushioned the downside last month.