It’s been a strong start to 2019. In researching this month’s piece, I came across these stats that illustrate market strength.

^The Russell 2000 Index is an unmanaged index of 2,000 smaller companies. The index cannot be invested into directly. Past performance does not guarantee future performance.

What’s behind the rally?

In part, the market was extremely oversold in late December, and markets tend to eventually bounce when the economic fundamentals don’t line up with a significant selloff.

Housing has been in the doldrums. Prices have been rising for several years, inventory has been limited, especially for starter homes, and mortgage rates spiked last year.

Sifting through the data tells us that this leading economic indicator has fallen into a recession. Existing home sales and new home sales are down (Natl Assoc. of Realtor [NAR] and U.S Census Bureau). And the same can be said for housing starts and building permits – see Figure 1.

Single-family housing starts are clearly more volatile, but the trend has been to the downside. Permits, which are more forward-looking, have also floundered. 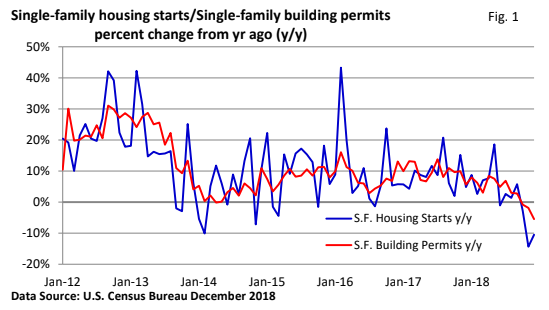 Lately, however, we may be seeing some stability amid the decline in mortgage rates (Freddie Mac weekly survey). Homebuilder confidence has improved per the NAHB monthly survey, and January’s NAR’s index of pending home sales rose at its fastest monthly pace since early 2017.

Mixed data is another way of saying that some reports are strong while others are weak. So, let’s end this update on a more favorable note. After sliding three-consecutive months, consumer confidence surged in February. 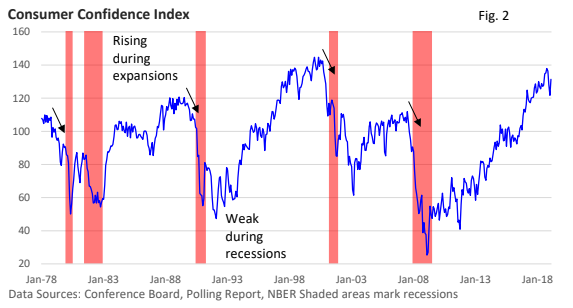 The end of the government shutdown and rising stock prices appeared to bolster sentiment.

This is a soft measure of the economy as sentiment isn’t a direct component of GDP. But it is a gauge that measures the “animal spirits” that can drive economic activity. A low level of confidence suggests animal spirits are dormant, while a high level suggests they are stirring.

While the level matters, the trend is just as important. Note in Figure 2 that confidence typically peaks in front of a recession, which makes February’s sharp gain encouraging as we push into 2019.