The Tortoise and the Hare

Most are familiar with the Aesop’s Fable, The Tortoise and the Hare. It’s a story that teaches that a slow, steady, and deliberate pace ultimately produces success. Without a doubt, the current economic expansion has been slow and steady. There are many drawbacks to its dull pace, but it has one silver lining – longevity.

That brings us to the National Bureau of Economic Research (NBER)? Repeat that name. Just saying it could end a sleepless night. But stay with me, I’m going somewhere with this.

The NBER is the official arbiter of economic recessions and economic recoveries (also called expansions). The organization bases its decision on complex models that take employment, manufacturing, income, and retail and business sales into account.

For investors, recessions and recoveries matter.

The current economic expansion just entered its ninth year. Put another way, it just turned eight years old. How do we know? The NBER marked the end of what we now call the Great Recession as of June 2009. 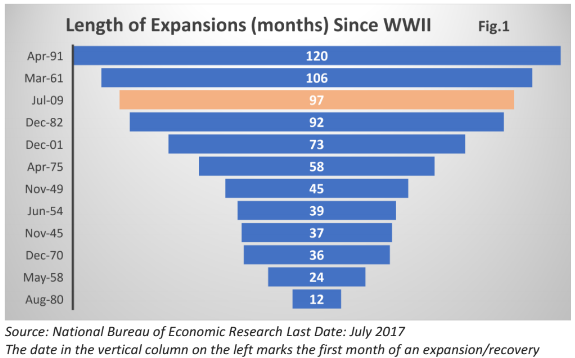 As Figure 1 highlights, the current expansion is the third longest since WWII, and we’re not far from moving into second place, which brings up a natural question. Is a recession lurking just around the corner?

It’s an impossible question to answer with certainty, as the brightest economic minds have historically done a poor job of calling turning points in the business cycle.

Still, expansions don’t die of old age. They usually come to an end because speculative excesses build up in the economy, such as the tech/telecom boom of the 1990s or the housing bubble in the 2000s.

Or, the Fed cuts off the expansion via rate hikes. The shortest recovery, which lasted only one year, experienced an early demise when then Fed Chairman Paul Volker hiked interest rates in an effort to end years of high inflation. His recipe worked, but the cost was steep – a lengthy and deep recession.

While accurately forecasting the next recession is problematic at best, we can look to leading economic indicators for clues. And most leading indicators aren’t flashing red, suggesting a near-term recession is unlikely.

It’s not that cracks in the economic foundation haven’t appeared, but the lackluster recovery has helped prevent most speculative excesses from building in the economy.

A bear market is typically defined as a 20% drop in a major market index, like the S&P 500 Index. While we came close to a 20% selloff in 2011, we haven’t had a full-fledged bear market since the last recession. 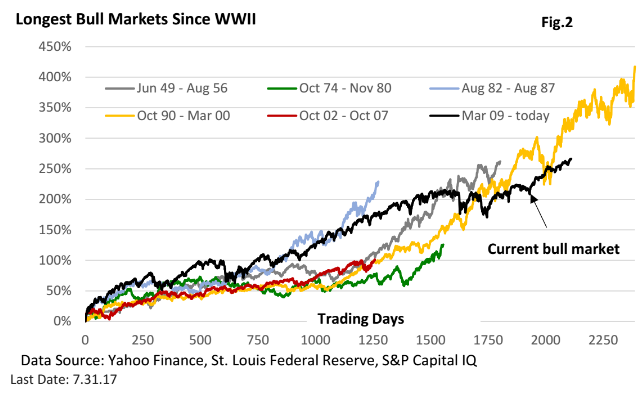 In fact, the current bull market is the second longest since WWII, second only to the bull market of the 1990s, which coincided with the longest expansion on record – see Figure 2.

Given the age of the current run in stocks, it’s fair to ask the same question that might be asked of the current expansion. Is a bear market lurking around the corner?

A recession and the bear market

Figure 3 speaks volumes. Recessions are closely tied to bear markets, or declines in excess of 20%. Why? Longer term, stocks march to the tune of corporate profit growth, and nothing stymies profit growth and expectations of profit growth more than a recession.

We have had only one bear market since the mid-1960s that was not tied to a recession – the one-day Crash of 1987. The 22% decline in the mid-1960s, mild by bear standards, correlated with a sharp slowdown in the economy, though a recession did not ensue. 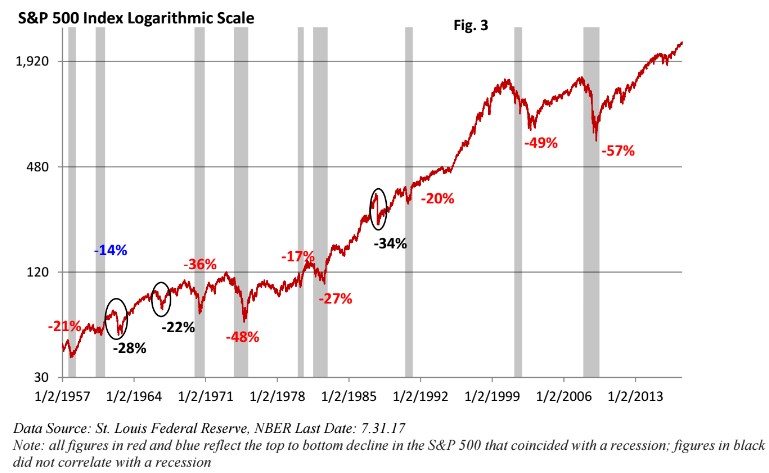 We can conclude that a recession will inevitably ensue, and we can reasonably conclude the economy will exit that recession. It’s been a pattern we’ve witnessed for over 200 years. We can’t say with certainty we’ll sidestep a 20% selloff absent a recession, but over 50 years of data suggest the odds we’ll experience a bear market outside of a recession are low.

We do see 10%+ selloffs from time to time (four since the bull market began per St. Louis Federal Reserve data), but the belief economic growth would continue prevented a more serious decline.

Based on the historical data, we can say that a steady and deliberate plan, i.e., one that eschews short-term emotional reactions that inevitably envelope investor psychology, enables investors to more effectively reach their long-term investment goals.

Put another way, it’s an alternative version of the tortoise and the hare.