Since stocks rolled over near the end of January, there has been a sharp pickup in volatility – big gains on some days and big losses on others. But the selloff since the January 26th peak has been modest. Index April Return* 2018 YTD Return % 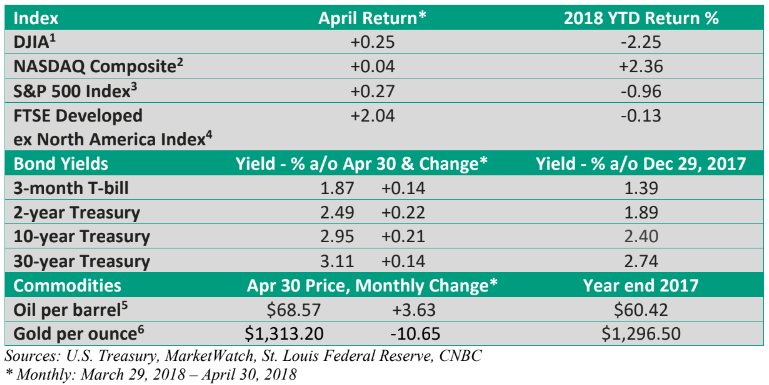 The Dow Jones Industrial Average®, which is the oldest and best known of the market averages (made of 30 large, well-known firms), is down 9.2% from its closing high as of April 30 (St. Louis Federal Reserve).

The S&P 500 Index®, which as its name implies consists of 500 larger companies, is down 7.8%. In both cases, the declines have been modest by historical standards. While markets trend higher over the longer term, we recognize that bumps in the road are normal.

Last year’s big advance left some investors with a false sense of security. Throw in very low volatility and it’s easy to forget that temporary pullbacks are the norm.

Successfully timing such selloffs – getting out at the top and back in at the bottom – is next to impossible.

We can mitigate risk, but not eliminate it. I understand that dips can sometimes be unpleasant, but they are incorporated into a long-term investment plan designed to reach your financial goals.

While shares aren’t far from all-time highs, we have, as noted above, experienced a much greater degree of volatility compared to 2017. Figure 1 highlights such volatility.

Through all of 2017 and the first month of 2018, the S&P 500 Index registered a daily change of 1% or more just 10 times. Over the next three months, the number of plus/minus daily changes accelerated to 29. 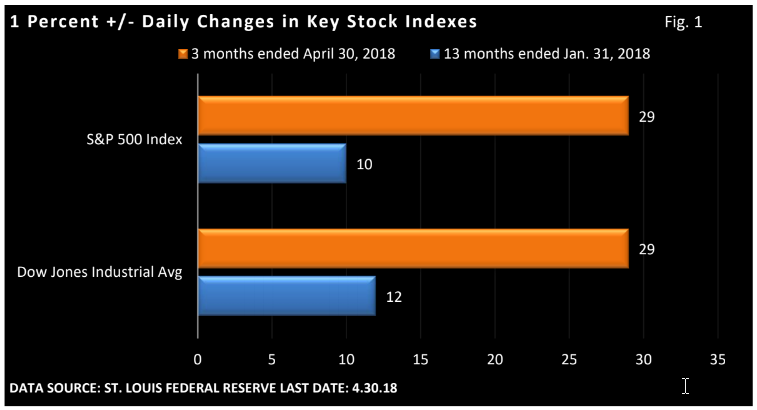 China and the uptick in rates

Trade tensions subsided after China’s president gave a conciliatory speech last month. He didn’t offer much in the way of concessions, but his tone was designed to ratchet down the rhetoric. Still, the issue isn’t going away, and protectionism and the potential hit to U.S. exports remains a concern as deadlines loom.

Unlike the steel and aluminum tariffs, even free traders agree China’s trade practices, which include forced technology transfers and restricted access to Chinese markets, are undermining the trading system (Wall Street Journal).

Some will agree with Trump’s approach and others will not, but both agree on the desired outcome.

Stocks have also run into modest resistance amid an increase in interest rates, including the yield on the 10- year Treasury bond.

The yield on the benchmark Treasury breached 3% for the first time since late 2013 – see Figure 2. Most analysts point to forecasts of faster U.S. growth, forecasts that inflation may tick higher, and the belief the Fed will continue to gradually hike the fed funds rate. Projections that point to higher budget deficits may also be playing a role.

At about 3%, the 10-year bond remains at an historically low rate, but the recent rise has injected some uncertainty into the shorter-term outlook. 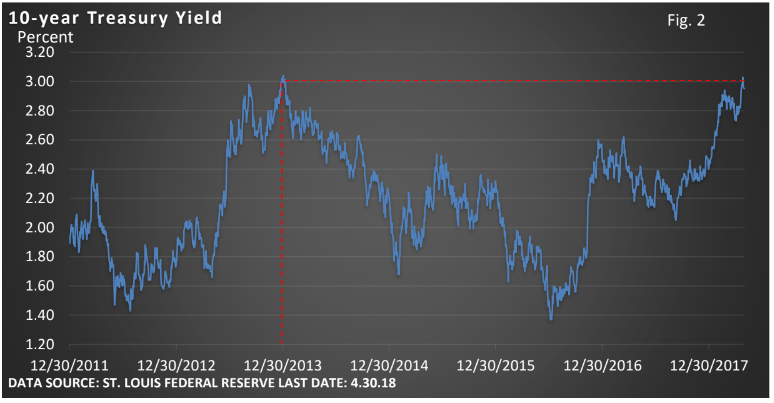 There is no shortage of academic theory to explain how rates may impact stocks. While an improving economy aids earnings and support shares, let’s avoid the academic weeds and keep things simple: rates that rise too quickly could slow economic growth and compete with stocks for the investors’ dollar.

The big winner – Q1 earnings…so why doesn’t it matter

More firms are beating analyst expectations than ever before (Bloomberg) and are beating by a wider-than-average margin. While strong earnings growth is an underlying support, it’s not fueling further gains.

Trade tensions and rates may be creating some headwinds, but it appears the very strong profit season may have already been priced in. Further, Q1’s upbeat numbers aren’t sustainable into 2019.

For starters, we won’t be getting another reduction in the corporate rate next year. However, earnings growth going forward will be compounded from a higher base.

How that is being priced into shares is unclear, but it is likely supportive of stocks longer term. Still, as we head into May, competing forces are creating volatility and have been keeping shares in a range.

If you any questions or have any items you would like to discuss, please feel free to reach out to me.