Entering the Second Half of the Year with Momentum

The U.S. economy just recorded its best quarter in nearly four years. Gross Domestic Product (GDP), which is the broadest measure of the value of a country’s economy, grew at an annual pace of 4.1%, according to the U.S. Bureau of Economic Analysis – see Figure 1.

We’ll get two more revisions over the next couple of months, but the early read is encouraging. 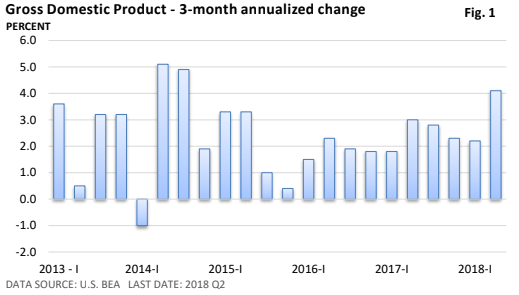 Without trying to minimize the good news, it’s important to point out that the GDP report is old data. It’s a snapshot of April – June. We’re entering August, which leads us to the next question. Was Q2 a one-time event, or are we entering a higher orbit of growth?

We’ve had false starts before – bursts of activity followed by a slowdown. And the trade war with U.S. trading partners is creating uncertainty.

Figure 2 illustrates that GDP, when measured on a year-over-year basis, has consistently and gradually accelerated for eight-consecutive quarters. It points to momentum. 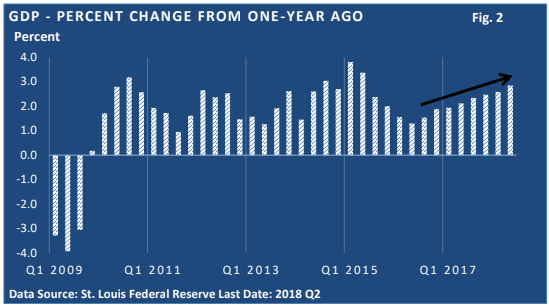 While growth in Q3 and Q4 may not match Q2’s 4.1% pace, there are reasons for cautious optimism as we push into the second half of the year.

Economic growth is beneficial in many ways. It creates jobs and new opportunities. While wage growth hasn’t been robust, a growing economy is necessary for wages to rise.

For savers, the expansion has finally started to lift interest rates, albeit at a gradual pace. For investors, economic growth is the engine of profit growth. And profit growth is the biggest factor that drives stocks higher over the longer term. 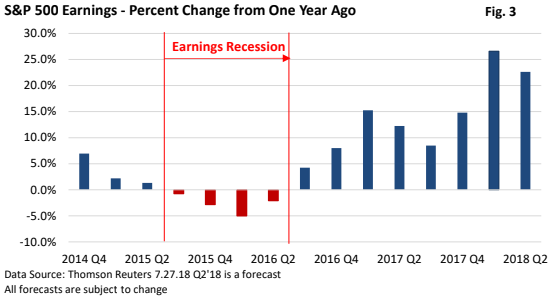 Q2 earnings season has been marked by several themes. Some companies have fretted about higher raw material costs, higher freight costs, and the negative impact of tariffs.

A couple of high-profile disappointments in the social media space generated recent volatility in the NASDAQ Composite, which for much of the year has been the beneficiary of tech outperformance. But these misses were mostly company-specific and not tied to economic weaknesses.

Thanks to the cut in the corporate tax rate, from 35% last year to 21% this year, Q2 earnings growth is very strong – see Figure 3. But let’s not discount U.S. economic growth either. By and large, forecasts being issued by companies for the rest of the year have generally been upbeat (Thomson Reuters). 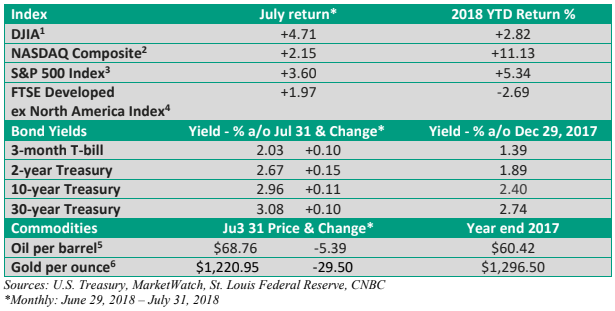 Given the negative headlines generated by trade tensions, economic growth + profit growth + interest rates that remain near historic lows have gone a long way in propping up stocks.

It suggests that investors aren’t experiencing too much anguish over the ongoing trade war. Or, it’s possible investors are underestimating the economic impact. Possibly, they expect the U.S. to prevail, or they simply don’t believe a trade war, even if extended in length, will have that much of an economic impact.

It has created some day-to-day volatility, and additional choppy action can never be ruled out. But the economic fundamentals continue to lend support.

As July came to a close, the S&P 500 was up 5.34% since the end of last year. It’s not earth-shattering, and it almost feels puny compared to last year’s exceptional performance. But if it were possible to extend the year-to-date gain through December, the S&P 500’s return would end up near its long-term annual average.