The Stock Market and Earnings

For much of the year, the overall stock market has exhibited an unusual lack of volatility. In fact, one must go all the way back to the week ended September 9, 2016 before finding a Friday-to-Friday period in which the S&P 500 Index fell by more than 2% (MarketWatch closing data for the S&P 500). 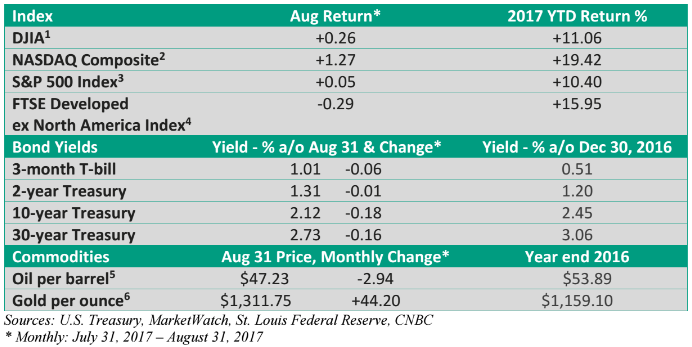 At times, the upward climb in stocks has been exciting. At other times, it’s been pretty dull. And maybe that helps explain some of the shrill headlines that have been popping up on financial websites – websites that thrive on clicks and ad dollars.

Those who adhere to a disciplined investment plan, one that focuses on long-term performance, shouldn’t be too concerned.

But we did witness a little bit of volatility creep back into the major indices last month, even as many of these same indices finished the month near record highs.

A heated rhetorical exchange between President Donald Trump and North Korea’s rogue leader created a modest degree of instability earlier in August. But it was short-lived. Uncertainty emanating from Washington may have also rattled a few short-term traders.

What was noticeably absent was the lack of a meaningful market response when North Korea tested a missile that flew over Japan during the last week of August.

Two observations—
First, absent a serious crisis, investors appear to be pricing in North Korea’s unpredictable missile tests. Hence, we saw a muted reaction to what was a very provocative act of aggression.

Second, at least in the shorter term, investors don’t believe the situation will spiral out of control.

In no way am I trying to downplay the seriousness of what is going on. But from a short-term investment perspective viewed through the narrow lens of the market, geopolitical uncertainties just haven’t had much effect on shares.Yes, stocks opened lower the following day but quickly rallied to finish in positive territory.

Sure, interest rates, corporate stock buybacks, the level of inflation, and more play a role, but profits and expectations of future profits are the biggest variable. 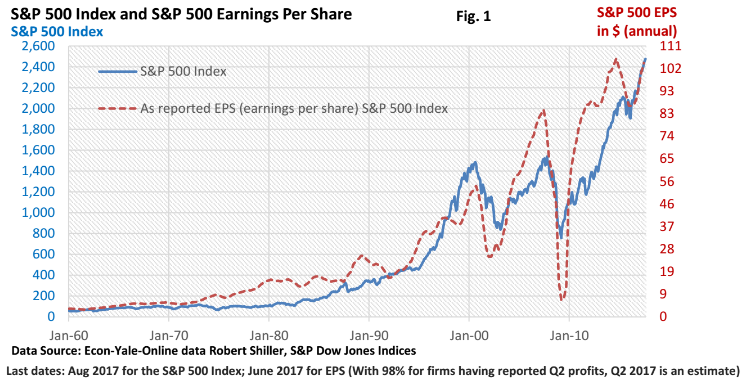 With Q2 earnings season set to conclude, companies posted sales and profits that were much better than analysts had expected, according to Thomson Reuters.

Thomson Reuters also reported that S&P 500 profits were up 12.1% from a year ago, the second consecutive double-digit increase. Profits were forecast to rise 8.0% as Q2 ended. 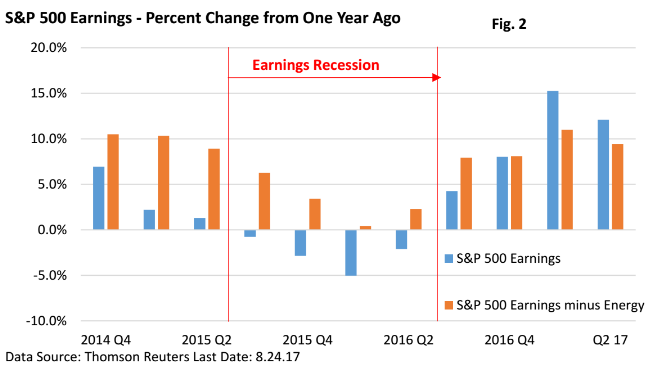 Notably, the four-quarter earnings (not to be confused with an economic recession) recession has ended.

Also, Figure 2 highlights the negative impact from the gyration in oil prices on S&P 500 earnings over the last two years. Still, even if energy is removed (the modest recovery in oil has aided earnings of energy companies), profit growth has been very respectable in recent quarters.

Bottom line – rising revenues and profits, in response to modest growth at home and an acceleration in economic growth around the world, has played a big role in supporting stocks. And it has occurred amid growing tensions with North Korea and dysfunction in Washington.

Simply put, investors have been focused on the fundamentals that drive stocks and have been looking past media-driven headlines.

Congress must pass and the president must sign a continuing resolution or pass a budget by September 30, or the government will shut down.

Of course, the government doesn’t completely shut down. Military, air traffic control, and other essential services continue, including checks for Social Security and Medicare. But non-essential government employees will stay at home and national parks would close.

Short-term traders get jittery, but the data going back to 1976 suggest any market impact is limited.

One year following the shutdowns, the S&P 500 was up in 16 of the 18 closures. If we awaken to news on October 1 that we’ve entered the 19th government shutdown since 1976, my sympathies will go out to those who have planned October vacations to America’s beautiful monuments and national parks.

From a market perspective, historically it has had minimal short-term impact and virtually no long-term effect.

The debate over the debt ceiling is another matter. Congress must raise the debt ceiling or the Treasury could default. It’s something that has never happened before. Republican leaders in both the House and Senate have said the ceiling will be raised before the limit is breached, likely in early October.

Bottom line—both narratives could increase volatility in September. While history strongly suggests long-term investors would likely look past a government shutdown, a breach of the debt ceiling, which is unlikely, would send financial markets into uncharted waters.