Last month’s update began with the headline, Strong Economic Fundamentals Drives Shares to New Highs. While I acknowledged that October has a ghoulish reputation, September is, on average, the weakest month for stocks (MarketWatch – Dow Jones Industrial going back to 1896).

This year, October, which historically sports a gain (St. Louis Fed data back to 1970), lived up to its supposedly undeserved reputation. 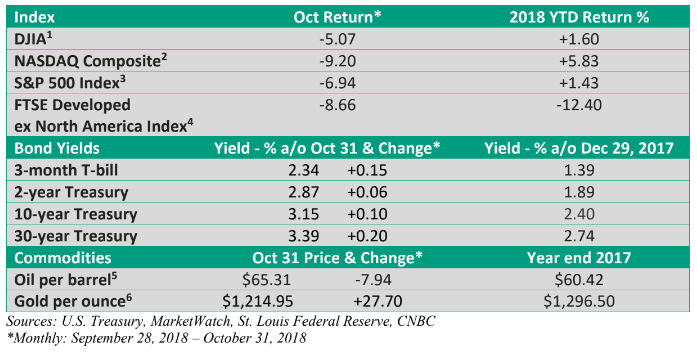 There wasn’t a specific catalyst that sparked the selloff but there were factors that influenced sentiment.

Weakness in capital spending may be just a one-time slowdown, and consumer spending remains strong. Moreover, job growth and the gradual acceleration in wage gains are set to support consumer outlays.

The Fed’s Beige Book, which is an anecdotal review of the economic data, isn’t suggesting a near-term slowdown, and the Conference Board’s Leading Index hit another high in September.

Taking the stairs up and the elevator lower

Stocks seems to take the stairs higher and the elevator lower. While we recognize that stocks don’t move up in a straight line, steep declines can sometimes be unnerving.

But trying to time the market and avoid surprises, well, it’s not a realistic option.

Benjamin Graham is not a household name, but he is well-recognized in the investment community. Best known as a mentor to Warren Buffett, he authored “Security Analysis” and “The Intelligent Investor,” two titles that influence financial planning today.

In the 1970s, he said, “If I have noticed anything over these sixty years on Wall Street, it is that people do not succeed in forecasting what’s going to happen to the stock market.” Agreed. Besides, a market timer must be successful twice – consistently and correctly forecasting the peak and trough.

While we may look for patterns that might provide insights, i.e., bear markets center around recessions and profit growth underpins longer-term stock market performance, former Fed Chief Ben Bernanke counseled, “These must be used with considerable caution and healthy skepticism.”

Even if a pattern emerges that may suggest a possible market turning point, if one is either early or late, it becomes exceedingly difficult to outperform the longer-term investment plan.

With that in mind, note in Figure 1 that market pullbacks are quite common. And so are annual advances. 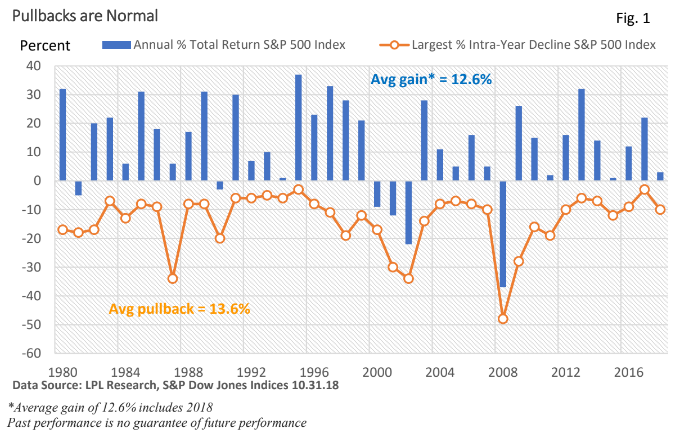 This year the largest intra-year decline is 10%. That occurred in February. We came close to 10% last month. While the swiftness in October’s selloff may be disquieting, recent weakness isn’t out of the ordinary.

We’ve seen risks push their way onto the stage before. When anxieties failed to materially impact the economic outlook, stocks recovered. Stay tuned.