November has been kind to investors, with multiple new highs for the major market indexes. Major milestones include: 28,000 for the Dow Jones Industrials, 3,100 for the S&P 500 Index (3,000 was eclipsed in July), and 8,600 for the NASDAQ Composite.

The fuel behind the rally

Q3 corporate profits haven’t been strong. In fact, Q3 S&P 500 earnings are down 0.4% versus a year ago (Refinitiv, 98% of companies having reported). However, 75% of S&P 500 companies beaten conservative estimates, which has lent support to shares.

Meanwhile, recession fears that surfaced during the summer months have subsided, encouraging investors to move into stocks.

Figure 1 highlights the ebb and flow of economic activity using a broad-based gauge called the Chicago Fed National Activity Index. It’s far from a household name, but the index is quite comprehensive and includes 85 separate monthly economic reports. 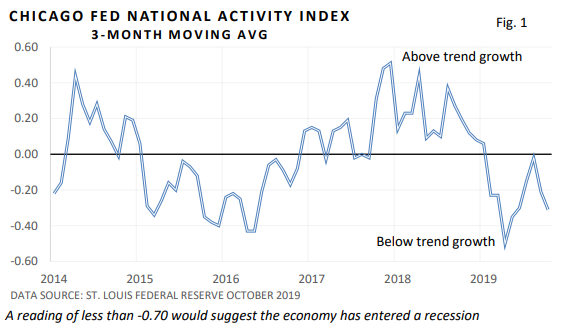 A soft manufacturing sector has been a drag on the economy. While growth this year has not been as robust as 2018, an expanding economy has softened the blow during periods of volatility.

Another variable—low interest rates. The Fed has cut rates three times this year, with the fed funds rate falling to 1.50-1.75% from 2.25-2.50%. While other factors have played a role, a more accommodative Fed has helped pull the yield on the 10-year Treasury down sharply– see Figure 2. 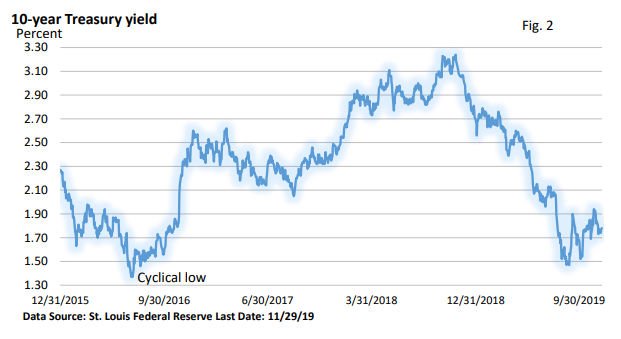 Trade tensions with China have dominated trading in 2019.

Optimism early in the year powered gains, increased tensions in May and August created volatility, while renewed optimism in the fall lifted stocks.

If a deal proves to be elusive, tariffs that are scheduled to go up on December 15 could lead to retaliation by China and renewed volatility.

Still, both sides would like to conclude some type of agreement, even as public posturing is likely to continue. We won’t get the kind of comprehensive agreement hoped for earlier in the year. But it would translate into incremental progress that reduces tensions going forward and sets the stage for a possible phase 2 agreement between the two countries.