The Dow Jones Industrial Average1 ended October near a record high. The same can be said of the broader-based S&P 500 Index3, which is a measure of 500 large publicly-traded U.S. companies.

Failing to end the month at a new high isn’t material. You see, through 10.31.17, the S&P 500 Index has recorded 50 closing all-time highs (LPL Research, St. Louis Federal Reserve). Notably, 20 have occurred since September 11, and eleven occurred in the month of October. It’s an impressive run.

Statistically speaking, September is the market’s weakest month (St. Louis Federal Reserve), while October has historically had a ghoulish reputation. Well, that didn’t happen this year.

Simply put, the fundamentals that have driven the rally remain in place – modest/moderate economic growth which is supporting corporate profit growth.

At the end of October, the U.S. BEA reported Gross Domestic Product (GDP), which is the largest measure of economic activity, grew at a 3.0% annualized pace in Q3. It was the second-straight quarter growth has met or exceeded 3%. It’s something we haven’t seen since 2014 – see Figure 1. 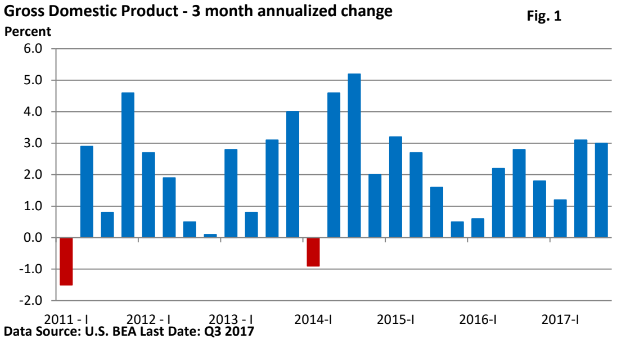 Just as important, we’re witnessing a synchronized acceleration in global economic growth. China is expanding at a brisk pace, while activity in Europe and emerging markets have accelerated. Even Japan’s much-maligned economy has been experiencing more consistent economic activity.

Why should U.S. centric investors care about the overseas economy? S&P Dow Jones Indices estimates that S&P 500 companies gathered 43.2% of sales from overseas in 2016.

S&P is quick to point out this is only an estimate because not all entities break out sales based on geography. Still, an estimate north of 40% is significant. So, it almost goes without saying that a brighter outlook overseas is a big benefit to U.S. multinationals, as we’ve seen from several Q3 earnings reports (CNBC, Bloomberg, various sources).

Need more convincing? FactSet Research estimated last month that companies with more than half of sales outside the U.S. were expected to post significantly higher Q3 profit growth than those that secure more than half their sales at home.

But North Korea hasn’t gone away

It hasn’t. But lately, headlines that might impact shares have been lacking. For that matter, missiles tests have had only a very limited and short-term effect on stocks. We don’t know when an alarming headline may surface, but investors have been discounting anything short of a crisis at the current time.

Discord in Washington? It’s failed to blunt bullish enthusiasm, as investors are rightfully keeping their eyes on the economic fundamentals.

About those new highs

That brings us back to the string of new highs we’ve experienced. One question that typically arises, “Is a new high the time to sell?” By itself, the short answer is “no.”

Nearly four years ago, Josh Brown, writing in the Reformed Broker, posted an inciteful piece that summed it up well. On January 15, 2014, he wrote—

“Just reading or hearing the term (new highs) itself engenders a certain kind of hysteria in people. It suggests that things are about to tip the other way any second, as we all carry within ourselves a cognitive defect known as the Gambler’s Fallacy. We innately believe that random occurrences are meant to balance out over short periods of time. That ten straight coin flips landing on heads virtually assures that a tails flip will be next – despite the fact that the next flip is its own event and nothing that came before it matters.”

The CNBC commentator added, “While our DNA and 100,000 years of evolutionary programming may lead us to believe that a new all-time high is a precarious perch and presages an imminent turn in the other direction, it isn’t ever quite that simple.”

So, selling the day the market reaches a new high simply means you will probably receive a slightly higher price than if you had sold the day prior. But it doesn’t tell us about tomorrow – or, for that matter, a week, month, or year later.

In reality, anyone who shares his or her thoughts on where stocks are headed next month or next year is only offering a guess. No one owns a crystal ball. Many factors, both known and unknown, will determine share prices next year. The economic fundamentals and corporate profits play a big role, but emotions can sometimes sway sentiment in the shorter term.

A disciplined approach based upon a time-tested investment plan may not completely remove the anxiety we might experience, but historically it has been the best approach to reaching one’s financial goals.