A Rate Cut in an Expanding Economy

The economy is expanding, consumer spending and consumer confidence are strong, job growth is respectable, layoffs are low, and the Federal Reserve just cut the fed funds rate by a 1⁄4% to 2.00-2.25% – see Figure 1.

It was a well-telegraphed rate cut. Only the magnitude of the cut was in question. 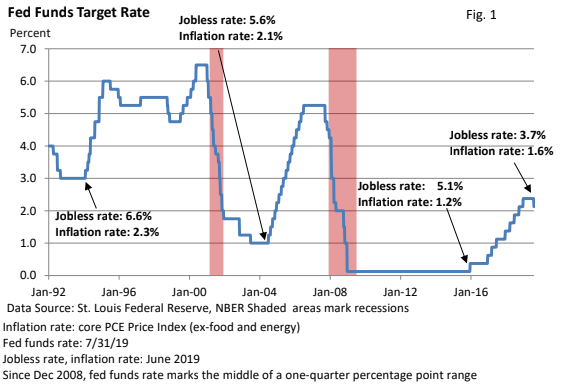 While the broad-based service sector is doing just fine, the manufacturing sector is in the doldrums, and business spending is soft.

A quarter-point rate cut won’t solve what ails manufacturing, nor will it jumpstart the global economy. Fed Chief Powell acknowledged such.

But he argued the shift in policy supports business confidence, and simply talk of a rate cut or cuts supports financial conditions.

Looking ahead, the Fed wasn’t as dovish as some had anticipated. Powell didn’t commit to a “lengthy cutting cycle,” nor did he say the Fed was one and done. Guidance was vague.

He said the Fed would be carefully reviewing the economic data, which suggests that stronger economic numbers could prevent further rate cuts. Yet, he acknowledged that trade tensions could still impact the decision-making process.

If you’re thinking he was playing his cards close to his vest, he was. Powell didn’t provide specific criteria for the next rate cut. He’s required to do so, but the initial, knee-jerk reaction wasn’t positive.

The most important ingredient in the stock market pie

Ultimately, it’s about economic and corporate profit growth. Today, the economy is expanding. It’s not rock-solid growth, it has moderated since 2018, but the economy is growing at a modest pace – see Figure 2.

In addition, we’re not seeing economic signals that would suggest a recession is looming.
• Key gauges of inflation and interest rates aren’t rising (1980/1982 recessions).
• We aren’t in the middle of a credit squeeze that could snuff out borrowing and the economic expansion (1980 recession).
• We’re not seeing significant asset bubbles (2001 and 2008).

Further, were not experiencing the kind of euphoria that leads to: “This economic joy ride will last forever.”

Yet, worries never completely cease. An economic shock can’t be ruled out, but odds are low. 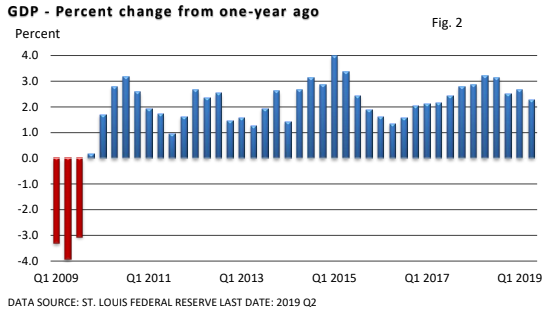 From time to time, the Fed will shift gears. For example, we’ve seen shifts in the Fed’s language and guidance in recent months.

So, control what you can control – the financial plan. Much goes into crafting your plan. While it can be tweaked and it doesn’t eliminate risk, it helps manage risk and is designed with up and down economic cycles in mind.

It is also designed with your financial goals in mind.