Trade Headlines and the Federal Reserve

While Fed policy factored into market activity in Q3, earnings and the economy took a backseat to trade headlines and geopolitical issues

It’s not that the economic data had no influence. An expanding economy cushioned August’s decline, which was a modest peak-to-trough drop of 6.1% for the S&P 500 Index (St. Louis Federal Reserve data).

If the data had signaled a sharp slowdown or a possible recession, stocks would likely have had a much weaker quarter. Instead, most major indices eked out a gain.

Still, investors took their cues from trade headlines for much of the quarter. In some respects, that’s been the case for the entire year.

Talk that China and the U.S. would agree to comprehensive trade deal fueled gains early in the year. That is, until the train leading toward an agreement ran off the tracks in early May.

China backed away from previously agreed-upon terms, President Trump retaliated with new tariffs, and a tit-for-tat escalation between the economic superpowers ensued.

In early June, the Fed shifted gears and hinted rate cuts might be needed as a buffer against trade uncertainty. Mix in a de-escalation of tensions and stocks recovered. 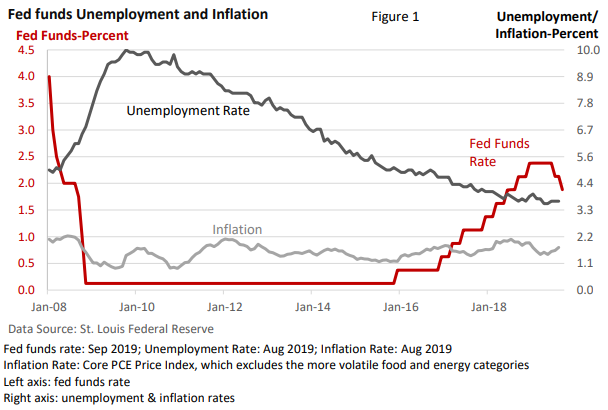 But sentiment improved when more comforting headlines revealed both sides would engage. A new round of negotiations between the U.S. and China are on the calendar.

Drama hits a fevered pitch in the nation’s capital

Meanwhile, U.S. House Speaker Nancy Pelosi said she would support an impeachment inquiry against President Trump, which adds another layer of uncertainty into the stock market equation. Yet, the initial reaction from investors has been muted.

Likely reason—the economic fundamentals are favorable. Still, many investors are asking what the political turmoil may mean for stocks.

Past impeachment proceedings may offer some clues – see Table 1

During President Nixon’s second term, inflation and interest rates were high, and the economy slipped into a steep recession. In other words, the economic fundamentals were terrible.

While Nixon resigned from office without being impeached, the House impeached Clinton but the Senate failed to convict. Despite the political brouhaha, stocks performed well amid a favorable economic backdrop.

Although no economic cycle follows the exact same path, today’s economic environment is more closely aligned to the late 1990 than the mid-1970s.

As we enter Q4, uncertainty abounds. Investors will continue to grapple with trade, a possible European recession, Brexit, and a soft manufacturing sector.

We have seen volatility on a short-term basis, and we may see more.

However, the two 2019 selloffs—one in May and one in August—amounted to less than 7% each (St. Louis Federal Reserve). And shares subsequently recovered. For the longer-term investors, 2019 has been relatively calm, and stocks and bonds have performed well.