In like a lion, out like a lamb is common folklore that refers to weather in March. It’s also an appropriate reference to how the broader market performed in October—volatility at the top of the month and calmer conditions and new high for the S&P 500 Index near the end (MarketWatch data).

One needs to go no further than the soft manufacturing economy and a weak manufacturing report that sparked a rocky start to October.

We have seen upbeat consumer spending, which makes up over two-thirds of the economy, but the smaller industrial side shouldn’t be discounted by investors.

Figure 1 highlights the close relationship between manufacturing activity and the S&P 500 Index since 1995. 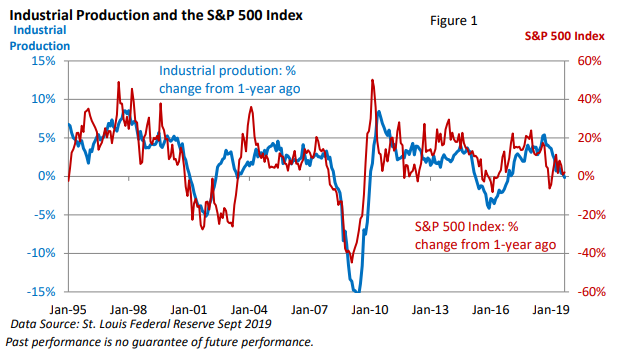 It’s not a perfect correlation, and we have seen times when the two variables have diverged. But for the most part, manufacturing has had an influence on stock market performance.

The International Monetary Fund issued its World Economic Outlook in October. It runs 188 pages and dives deep into the inner workings of the global economy. For our purposes, we’ll touch on the highlights and keep to the matter at hand—manufacturing.

1. A sharp downturn in global auto production and sales,
2. Weak business confidence amid growing tensions between the United States and China on trade and technology, and
3. A slowdown in China’s economy, which is being driven by needed regulatory efforts to rein in debt and the consequences of increased trade tensions.

Further, growth in Europe has been weak, with Germany, which is more dependent on trade, teetering on the brink of a recession. Germany is Europe’s largest economy.

Let’s add two more factors.
1. Boeing’s (BA $340) well-documented troubles with its 737 MAX have hindered airplane sales and production, which may be moving the needle on manufacturing at home.
2. Activity in the oil patch has softened as oil companies focus on profitability in the shale fields vs costly all-out production. We can see the downturn in oil-related activity in the GDP data (U.S. BEA), including the most recent release on October 30.

It’s something that may not have mattered 10 years ago. Today, however, the U.S. is the world’s largest oil producer. Therefore, what happens to energy will have an impact on the economy at the margin.

In both cases, the slowdown ripples through to related industries.

A peek into the crystal ball

While the Conference Board’s Leading Economic Index is suggesting further moderation, it’s not signaling a near-term recession. Investors who are pushing stocks to new highs aren’t expecting a recession either.

Although the economic expansion has entered its 11th year and trade issues aren’t settled, economic conditions that might force the economy into a recession are mostly absent.

No two economic expansions are exactly alike, but inflation and interest rates aren’t soaring (1980/82 recessions), businesses and consumers have access to credit (1980), and we don’t appear to be in the middle of an asset bubble (2000 and 2008).

Yes, stocks are near or at new highs and we can never discount the potential for volatility. Still, valuations are much more reasonable today (vs 2000) when using earnings and today’s interest rates as our yardstick for valuing equities.