At one point, the Atlanta Fed’s GDPNow model, which incorporates economic reports on a real time basis, placed Q1 economic growth at 3.3%. But that was yesterday’s news. The coronavirus epidemic has forced economic activity to a halt in many parts of the country. What we are seeing is far different vs. the more typical recession, if there is such a thing as a typical recession.

Recessions have their roots in various causes. Inevitably, consumer and business confidence takes a hit and spending declines. Today, however, many are simply unable to spend.

Social distancing and mandatory closures of businesses have placed a roadblock in front of our normal spending patterns. The service sector, with its person-to-person interactions, has been the hardest hit, and massive layoffs have begun.

The shift in the atmosphere has been incredibly abrupt. Aircraft carriers don’t turn on a dime. But the $20 trillion U.S. economy has. It’s unprecedented.

We are seeing an enormous amount of volatility in the stock market because investors don’t know how to forecast the depth and severity of the recession or what will happen to corporate profits.

The enormous amount of economic uncertainty is very difficult to model (to predict the eventual outcome) because we don’t have a modern precedent.

Imagine a ship near a rocky coast that’s socked in by fog, but the lighthouse isn’t putting out light. Or, you’re driving down the road at 40 mph and someone puts a blindfold on you. In a manner of speaking, that’s what’s happened to the market.

Today’s recession more closely resembles a natural disaster that affects an entire region. When a disaster happens, businesses typically treat such an event as transitory.

This time, the entire country is feeling the sting. The longer it drags on, the more businesses will fail and the more temporary layoffs will become permanent.

The Fed and the government step in

In order to soften the economic blow, the Federal Reserve has gone well beyond simply cutting interest rates to zero. It has implemented several programs designed to keep credit flowing in the economy and prevent a health crisis from morphing into a new financial crisis.

That said, banks are in much better shape today than 2008. The Fed has been proactive to prevent, not react to a major failure. In just three weeks, it has purchased nearly $1 trillion in assets to support various credit markets (Fig. 1). That number will likely go much higher. 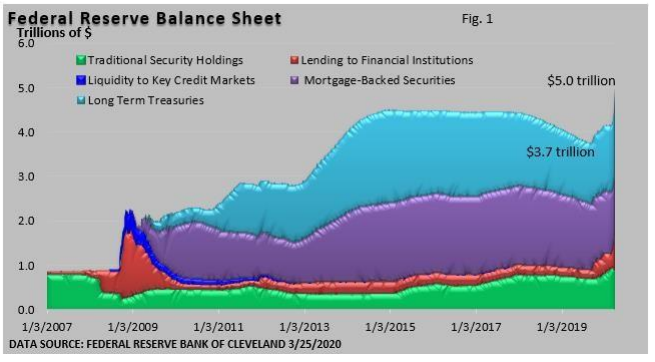 Yet, its interest isn’t simply in Wall Street. It has also reached out to Main Street and is getting deeply involved in loans and grants to small businesses so that firms can maintain payrolls, at least for a time.

Put another way, its response has been far more aggressive and its scope has been much broader than during the 2008 financial crisis. The same can be said of the $2 trillion stimulus package signed by the president at the end of March.

The goal – ease what’s going to be a steep economic downturn in Q2 and put a foundation in place for an eventual economic recovery. If government mandates require we stay at home and require that businesses temporarily close, it only seems reasonable for the government to lend a helping hand.

Though volatility is expected to continue, it’s an important reason why stocks rallied near the end of March following a 34% selloff in the S&P 500 Index in just over a month (St. Louis Federal Reserve).

The average peak-to-trough decline in a bear market (defined as a 20% drop or greater) is 36.2% per LPL Research (back to 1929). But the speed of today’s decline is unprecedented.

Cratering demand for oil and a price war launched by Saudi Arabia last month sent oil prices to the lowest level in almost 20 years. However, falling gasoline prices are likely to provide little support for spending as driving subsides and layoffs hit the energy sector. 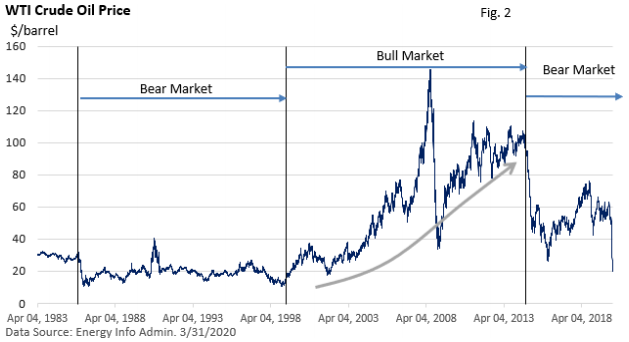 There isn’t a modern precedent, but let me offer two past epidemics as guidance.

The deadly 1918 Spanish flu pandemic caused a 7-month recession in the U.S. (National Bureau of Economic Research). Going back to the 1850s, it is the shortest recession on record.

In Q1 1958, GDP fell 10.0% (St. Louis Fed). While the research available is sparse, the 1957-58 outbreak of the Asian flu appears to be the culprit behind the steep decline. GDP rebounded in the second quarter, and the length of the recession was pegged at 8 months (NBER).

Still, I recognize the economy today is much different. We’re much more service-oriented today. In the late 1950s, our manufacturing base was bigger. Yet, massive stimulus is in the pipeline.

But here are some signposts to look for.

I recognize this is a very troubling time. What’s happening is unparalleled in modern history. We are facing an economic crisis, and one inspired by a health crisis. Historically, pandemics peak, and this one will peak, too. Further, underlying U.S. economic fundamentals are strong.

I’m confident that we will eventually see an economic recovery, furloughed workers will start going back to work, and you and I will patronize these businesses. In the meantime, I’m always available to take your questions and discuss your concerns.

Stay safe, stay healthy, abide by government mandates designed to slow the spread of COVID19, and remember, my door is always open.