The economic data are rolling in. With few exceptions, we don’t have much of a read on April’s numbers, but March has been ugly.

Weekly first-time claims for unemployment insurance have exceeded 30 million in a 6-week period – see Figure 1. It’s disheartening and a number that would have been inconceivable a couple of months ago. 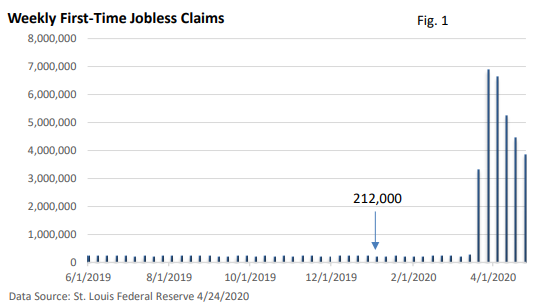 March’s 5.4% decline in industrial production was the biggest one-month drop since the end of World War II (St. Louis Federal Reserve). A 7.5% decline in March consumer spending was the largest ever recorded (dating back to 1959).

The Chicago Fed National Activity Index is a broad-based measure of economic activity. It is comprised of 85 separate monthly indicators.

In March, it registered its sharpest monthly decline ever – see Figure 2. 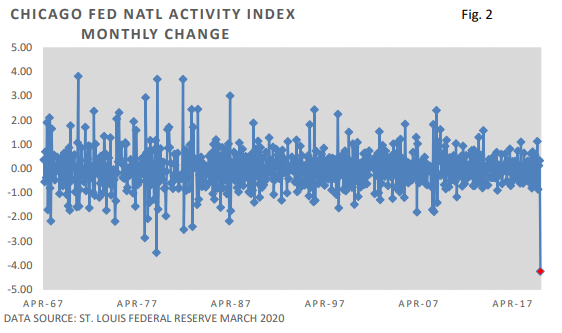 Preliminary Q1 GDP fell at an annualized pace of 4.8% – see Figure 3. The number is subject to revisions. Q2 is expected to be much worse as the full impact of the crisis is reflected in the economic data. 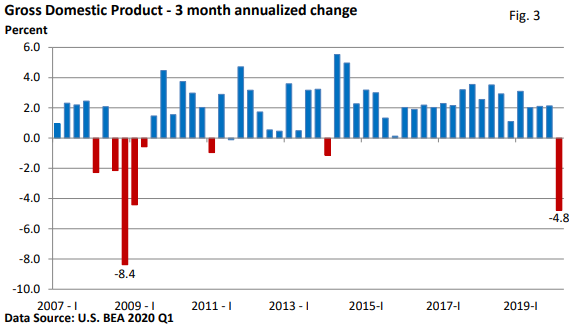 The monthly rally for the Dow and S&P 500 is the best since 1987 and the best April since 1938, according to Dow Jones Market Data.

We can continue to expect stock market volatility in the near term. The economic outlook is uncertain as businesses slowly re-open, but there is talk of more support from the federal government and the Federal Reserve. Given what’s happening in the real economy today, stock market reaction has been cautiously encouraging.

I don’t want to downplay the havoc created by COVID-19. We are living in a world that nobody could have possibly envisioned a few months ago. You may have friends and loved ones who are dealing with the disease. It’s incredibly unpleasant.

Yet, unexpected blessings have surfaced. People are reaching out to family and friends via texting, Zoom, and emails. Some are even connecting the old-fashioned way – by phone.

Activities and jobs around the country have been suspended but not ended. I am confident we will eventually see an economic recovery take root, and the pandemic will subside.

We are a resilient people. Together we will get through this dark night, and we will be stronger for it.

Stay safe, stay healthy, and please abide by government mandates designed to slow the spread of COVID-19. Remember, my door is always open.