Historically, September has not been kind to investors. Using S&P 500 data from the St. Louis Federal Reserve dating back to 1970, September ranks dead last in returns.

But October has the ghoulish reputation. The Crash of 1929 and 1987 were in October, and the selloff in October 2008 was tied to the financial crisis.

But reputations don’t always square up with reality. October has historically been a favorable month for stocks, according to long-term averages (St. Louis Federal Reserve data). 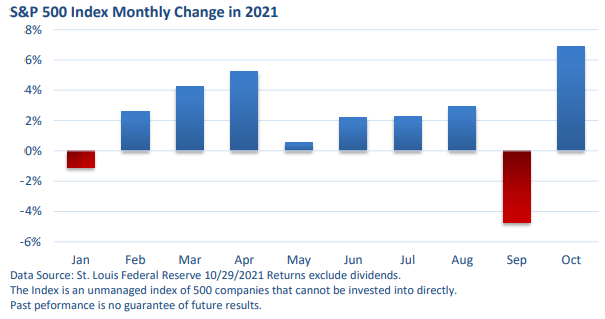 More impressively, the S&P 500 has cobbled together strong returns for much of the year. Seven of the last ten months have seen an advance of at least 2% in the broad-based index.

Since the beginning of the year, the S&P 500 has set 59 new closing highs, according to LPL Research and S&P 500 data from the St. Louis Fed.

So, what helped turn stocks around following a modest decline in September? The start of Q3 earnings season was the primary catalyst for October’s convincing performance.

Given the unending chatter about slowing economic growth, rising inflation, cost pressures, and significant supply chain bottlenecks, investors were too pessimistic going into the season. Expectations had been lowered and anxieties were high.

The large banks unofficially kicked off earnings season in the middle of the month. Results came in much better than expected, according to CNBC and the Wall Street Journal, and it sparked a shift in sentiment.

Over a two-day period that ended October 15, the Dow rallied 917 points, or 2.7%, according to market data provided by the St. Louis Fed. Within a few days, the Dow and the S&P 500 Index claimed fresh territory.

That doesn’t mean there weren’t any problems. A number of firms said cost pressures and supply chain bottlenecks hampered results. Overall, however, the numbers have been strong.

Here’s another short, but more granular look. On October 1, analysts were forecasting a 29.4% rise in S&P 500 profits versus a year ago, per Refinitiv.

As of October 29 (with 56% of companies having reported results), analysts had ratcheted their estimate to 39.2%, a significant upward revision. As we’ve seen in recent quarters, Wall Street analysts have been far too conservative in their profit forecasts.

Anything north of 20% would historically be strong.

Today, we’re comparing recent results with numbers from a year ago, when the economy was just beginning to recover from a short but severe recession. Still, an upward revision of nearly 10 percentage points is impressive.

Also aiding sentiment, analysts have upwardly revised estimates for Q4 and 2022, which have also aided the broader stock market.

Yet, and not to throw a cold towel on the strong year-to-date-performance, we can never discount the possibility of a market correction.

Inflation remains a threat and the Federal Reserve has tilted slightly more hawkish as of late. Nonetheless, the fundamentals have been quite positive.