In December 2020, the news media reported a new variant of the coronavirus that causes COVID-19. Since then, other variants have been identified and are under investigation, according to John Hopkins Medicine.

If we quickly review the CDC’s website, we count 11 variants. Many remain under the radar, such as the Alpha, Beta, Gamma, and Epsilon. Lambda is no longer mentioned by the CDC.

The Delta variant, labeled a variant of concern, has been responsible for the spike in cases during the summer and fall.

Not one has caused much concern among investors amid the growing use of vaccines and therapeutics. This is very important to the economy and investors, as these tools have been used in place of economically destructive lockdowns and social distancing restrictions.

It’s not that they are full proof. They aren’t. But lockdowns and various restrictions had been the preferred tool for government officials.

On Black Friday, Omicron was labeled a variant of concern by health officials. It’s still very early, and the situation is fluid, but Omicron appears to be very contagious, and current vaccines and treatments may be less effective.

On Black Friday, the knee-jerk reaction among short-term investors was to sell first and ask questions later, as they openly fretted about any potential impact on the U.S. and global economy.

Following sharp gains over the last year, it’s not a surprise that unexpected bad news can create the right conditions for a selloff. But end-of-month weakness doesn’t necessarily presage further losses.

Today, short-term traders are trading on headlines. If further bad news is not forthcoming or updates to vaccines and treatments prove to be effective against Omicron, we could see volatility brought on by the new variant recede.

As the month ended, we received a signal from Fed Chief Powell that the Fed is starting to take inflation more seriously.

“At this point, the economy is very strong and inflationary pressures are higher, and it is therefore appropriate in my view to consider wrapping up the taper of our asset purchases … perhaps a few months sooner,” Fed Chief Powell said before a Senate committee.

In early November, the Fed said it would begin tapering its $120 billion in monthly bond purchases by $15 billion per month in November and again in December. Economic conditions would dictate the pace in 2022.

November 30th comment was a shift in Powell’s stance, and investors took notice.

Yes, Virginia, the economy is strong, but so is inflation

However, the Consumer Price Index (CPI) rose 6.2% versus one year ago. It’s a 30-year high. And it’s not simply food and gasoline that has driven up prices. 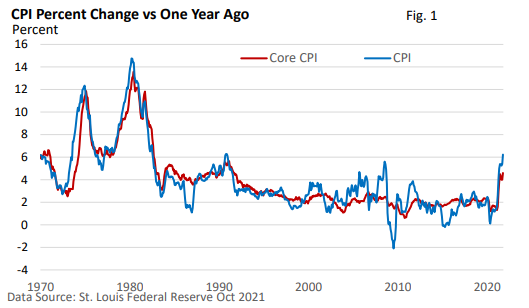 Pent-up demand and a boatload of pandemic stimulus are fueling economic activity. In addition, raw material costs and wages are rising, and supply has been affected by production woes around the globe. It’s the perfect storm for higher inflation, and it may finally have the Fed’s attention.

Yet, volatility is usually short lived. Over long periods, the major stock market indexes have had an upward bias. But we recognize that gains don’t come in a straight line.

We continue to suggest adherence to your long-term financial plan. It doesn’t eliminate risk but helps manage risk. We also discourage timing the market. Few if any can consistently pick the peaks and valleys in the market.

Time in the market, not timing the market, has historically been the best long-term path for wealth creation and reaching one’s financial goals.