Talk of a steep series of rate hikes, persistently high inflation, recent recession worries, Covid lockdowns in China, and the backdrop of the war in Ukraine created stiff headwinds for stocks in April.

Minus the war and lockdowns in China, the overriding themes since the beginning of the year have been inflation and how the Federal Reserve might react to inflation. During April, most Fed officials pulled few punches, and investor sentiment reflected the sour mood.

Let’s review the table below. Stocks had a tough month as bond yields jumped. Furthermore, yields are up sharply since the beginning of the year. Without diving into a mind-numbing discussion of discounted cash flows, higher rates compete with stocks for an investor’s dollar.

Last year, yields held at stubbornly low levels, despite high inflation. This year, the aggressive stance from Fed officials has moved the needle on bonds.

Let’s look at a couple of remarks last month. “It is of paramount importance to get inflation down,” Fed Vice Chair Lael Brainard said in an early April speech (Wall Street Journal).

“Paramount” is a strong word. It wasn’t an off-the-cuff comment. It came in prepared remarks. Since she had been considered more dovish (reluctant to aggressively raise interest rates to slow inflation), her comments suggested other dovish members are on board.

San Francisco Fed President Mary Daly said high inflation “is as harmful as not having a job… If you don’t have the confidence (the Fed will use its inflation-fighting tools), let me give it to you (CNBC).”

What is the Fed trying to communicate? Well, Fed officials don’t want to surprise investors, especially if it involves rate increases. It’s better to hint at any pain rather than surprise with shock and awe.

One closely followed measure from the CME Group suggests a 50 bp (basis point, 1 bp =0.01%) rate hike at the May 4th meeting is all but guaranteed. There is also a high probability May’s increase could be followed by 75 bp in mid-June, and another 50 bp in July.

While there are no guarantees as economic conditions could change, such a path would put the fed funds rate at 2.00-2.25% after the July meeting, up from 0.25—0.50% today.

It’s a magnitude of rate hikes we haven’t seen since 1994—see Figure 1, which is a repeat of last month’s graph. 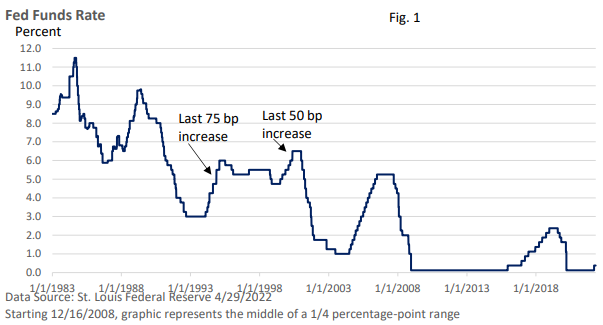 In the 2000s, the Fed’s tone was more measured: a series of 25 bp rate hikes over two years, as it ‘pre-emptively’ moved against inflation. It was even more gradual in the 2010s. Today, the Fed is ‘reacting’ to inflation, hoping to atone for last year’s mistake, since it mistakenly believed inflation was temporary.

However, better-than-expected first quarter profits, according to Refinitiv, helped shield investors from even more volatility. Plus, most economic gauges point to economic growth.

For instances, if the economy were slowing significantly, we would see it in an uptick in layoffs. First-time claims for unemployment insurance are near the lowest since the late 1960s. As Figure 2 illustrates, continuing claims, which measures the number of individuals who receive regular benefits, is at the lowest reading in over 50 years.

If those folks were struggling to find work, claims would be rising. 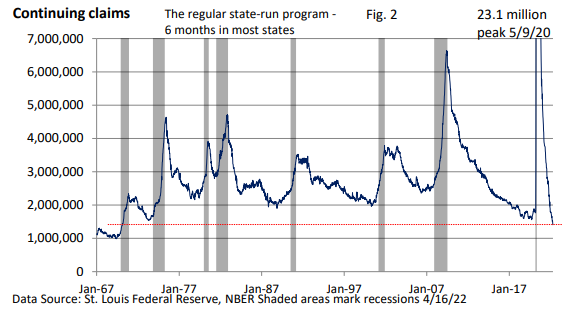 Besides, anecdotal reports from various companies, including restaurants, travel, and entertainment, suggest the consumer is healthy.

For example, an April 23rd story in the Wall Street Journal:

Consumers would be far more reluctant to shell out the big bucks if they weren’t feeling good about their finances. Recent GDP data from the U.S. BEA confirms strong spending on services, though we are seeing a modest shift away from goods.

While wages aren’t keeping up with inflation, some stimulus money is still socked away in savings accounts, which is aiding spending.

But higher interest rates and incomes that aren’t keeping up with inflation could eventually lead to greater resistance. We are not there yet, as the Federal Reserve hopes to slow inflation without leading the economy into a recession.

It will require skill and a little bit of luck.

The recent rise in the dollar could help slow inflation for imported goods. Next, help with the supply chain would be welcome. If you have questions or would like to talk, we are only a phone call away.