The tech-heavy Nasdaq Composite has lost nearly 30% from its November closing high to its latest bottom in late May (Yahoo Finance). But the Nasdaq and the better-known Dow Jones Industrial Average, which is off 15.1% peak-to-trough, are usually not considered arbiters.

Instead, the S&P 500 Index is generally considered the benchmark for bear markets.

On an intra-day basis, the S&P 500 briefly pierced the 20% barrier late last month, according to the Wall Street Journal, but the index has yet to close below 20%.

While bear markets can be unsettling (and let’s remember, we have yet to officially enter a bear market), the duration has typically been shorter than bull markets.

The Schwab Center for Financial Research reviewed S&P 500 data going back to 1966. It found that the average bear market lasted 446 days (including weekends/holidays), with an average decline of 38.4%.

Figure 1 highlights that since the mid-1960s, bear markets have centered around recessions.

Except for the 1987 one-day market crash, we must go back to the mild bear market of 1966, when the S&P 500 shed 22% amid a sharp slowdown in economic growth. But a recession was avoided. 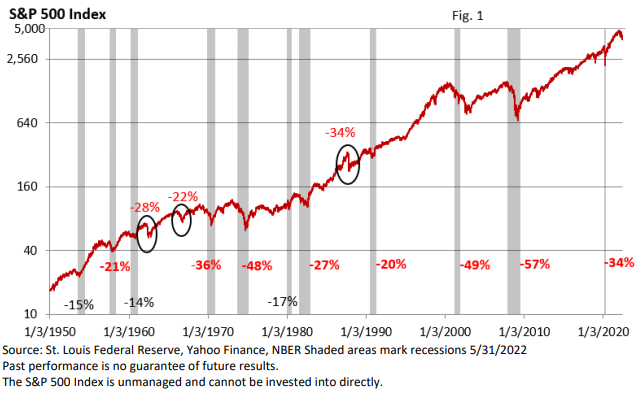 Let’s look at a few more statistics. LPL Research reviewed data going back to the end of WWII.

It found that the S&P 500 Index lost an average of 32.7% during 13 bear markets, with the average bear market lasting 12.8 months. If we slide into a bear market, its start date will be pegged at January 3.

For starters, we can blame market weakness on high inflation and the Federal Reserve.

The Fed has responded to high inflation via a much more aggressive response than past ratehike cycles.

Last year, the Fed kept its super easy monetary policy in place far too long, forcing it to play catchup.

We can also point to Russia’s invasion of Ukraine, which has pushed the price of oil above $100 per barrel, new supply chain disruptions from draconian Covid lockdowns in China, and some fears that the economy may slip into a recession later in the year or early next year.

No one knows when we may bottom or if the market has already put in a bottom. Yet, there is no shortage of opinions from market ‘gurus’ and ‘talking heads.’

Historically, on average market pullbacks have not been as deep and as long when a recession was avoided.

We also know that time in the market, not the attempt to time the market, has been the better path to one’s financial goals.

To paraphrase one financial journalist, the hall of fame for market timers is a very lonely club.

Warren Buffett once said, “I never have the faintest idea what the stock market is going to do in the next six months, or the next year, or the next two.” His track record speaks volumes.

What do we typically see at a market bottom? There is no shortage of negative chatter.

As the long-term data suggest, market pullbacks eventually end, and stocks move higher. Why? The U.S. economy has expanded over a long period, and a well-diversified portfolio has tapped into that long-term economic growth.