Whichever way we might define the term, the rally that began in October and led to an 8% rise in the S&P 500 Index and a nearly 14% surge in the Dow Jones Industrial Average (MarketWatch) carried over into November.

It might not fit the traditional definition of a Santa rally, but the holiday season’s ever-growing reach coincided with a November rally that helped the major indexes pare losses that began in January.

Last month’s catalyst was growing evidence that the rate of inflation may finally be starting to slow down.

On November 10, the U.S. Bureau of Labor Statistics (BLS) reported that the Consumer Price Index (CPI) rose 0.4% in October. The core CPI, which strips out food and energy, rose 0.3%. Analysts polled by MarketWatch had forecast 0.7% and 0.5%, respectively.

Why the dramatic reaction? A slowdown in the rate of inflation will take some pressure off the Federal Reserve, which has been aggressively hiking rates to tame inflation.

One risk going forward is the growing threat the economy might slip into a recession next year.

The real deal or another head fake?

Figure 1 illustrates the trend in the core CPI since 2020. 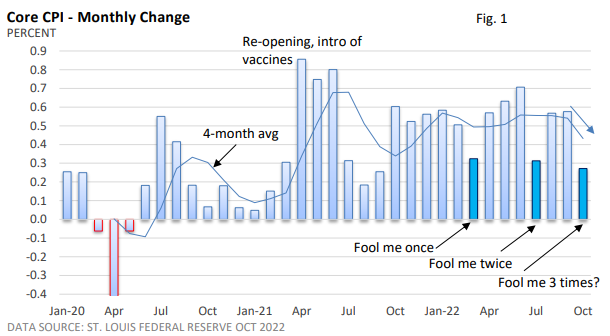 We’ve witnessed a pullback in inflation this year: one in March and one in July. But there was a lack of follow through. The smaller-than-expected rise in October is welcome, but it is not consistent with the Fed’s annual goal of 2% inflation.

The return to price stability won’t occur overnight. Still, note the dip in October for the 4-month moving average. It is cautiously encouraging.

Yet, we are not out of the inflationary wood. While wholesale prices continue to ease (U.S. BLS data), inflationary-wage gains, which put upward pressure on prices, have yet to subside.

As we head into December, the Fed is suggesting rates could remain elevated for a longer period, but the increases appear set to slow, which has been a favorable development for investors.

The bankruptcy of several cryptocurrency trading platforms, including FTX (the world’s 3rd largest by trading volume per the Wall Street Journal), highlights the highly speculative nature of trading in crypto.

However, “digital bank runs” and the evaporation of liquidity haven’t spilled over into the broader economy and traditional financial markets. It’s in sharp contrast to what happened when Lehman Brothers collapsed in 2008 and quickly roiled interconnected financial markets.

Practically speaking, the crypto space is fenced off from the rest of the economy.

Today, we don’t see traditional firms providing much capital to crypto firms. Therefore, they are not in line with other unsecured creditors, writing off investments, or seeking taxpayer funded bailouts.

Once the crypto dominoes fell, they knocked down dominoes in the crypto world. So far, the damage has been limited mostly to investors in cryptocurrency.