The market had a banner year in 2021, with the S&P 500 Index advancing over 25%, according to data from the St. Louis Federal Reserve. But tailwinds that fueled gains shifted dramatically in 2022. No longer were the economic fundamentals favorable.

With inflation proving to be much more stubborn than expected, policymakers at the Federal Reserve hiked interest rates at the fastest pace in over 40 years, surprising investors and sending stocks into a bear market.

Rate-hike cycles are not created equally. In the past, rate increases began prior to a level considered full employment, proactively striking out against inflation.

Last year, however, the Fed’s posture was reactive, raising rates after the inflation genie had popped out of the bottle.

Figure 1 illustrates the first-rate hike cycle following a recession, dating back to the 1981-82 recession. 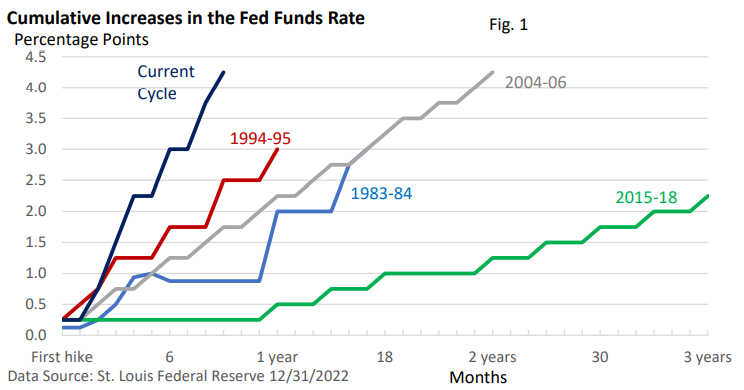 Table 2 illustrates the return of the S&P 500 Index (without dividends reinvested) from the first rate increase to the final increase in each series of increases.

The two most aggressive cycles—1994 and 2022—created the stiffest headwinds for investors. Stocks performed best during the very gradual moves during 2015—2018.

In fact, the S&P 500 Index was up over 40% between December 2015 and September 2018 before shedding about half its gain during the final three months, as recession concerns surfaced.

Looking ahead, the Fed expects to slow the pace of rate hikes this year but has also signaled that it could maintain a peak rate over a longer period, as it hopes to wring inflation out of the system.

But be aware that a glance into the future is murky at best. The Fed’s own forecast one year ago envisioned rates hikes totaling just 0.75-percentage points for the entire year. Even the smartest folks in the room aren’t exempt from a bad forecast.

While inflation remains too high, the rate has moderated. After peaking at a 40-year high of 9.1% in June, the Consumer Price Index (CPI) slowed to 7.1% as of November.

The core CPI, which strips out food and energy, hit a peak of 6.6% in September and has eased to 6.0% as of November (U.S. Bureau of Labor Statistics).

But it remains well above the Fed’s annual goal of 2%.

Blame the war in Ukraine, which disrupted traffic in commodities including wheat and oil, for the much bigger jump in the headline CPI.

Lessons from the past

Whether we agree or disagree that the Fed’s tough posture is the right medicine, its decisions are rooted in the lessons of the 1970s.

In the mid-1970s, the Fed sidelined its fight against inflation while prices were still rising between 6% and 7% per year. Inflation roared higher in the late 1970s and peaked at nearly 14% in 1980. Inflation was fully embedded in the economy, which required a massive response. 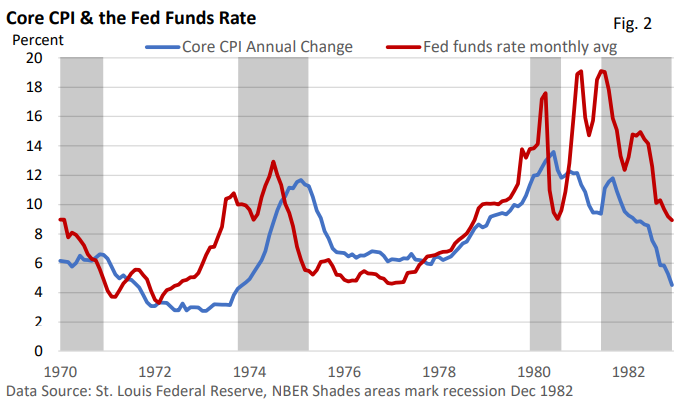 Inflation turned lower, but the cost was a steep recession in 1981-82. By acting forcefully now, the Fed hopes to avoid a repeat. However, do not expect prices to return to pre-pandemic levels.

The Fed’s actions have raised fears that the economy is on a collision course with a recession—a hard landing.

If we slip into a recession, rate hikes would probably cease, and we might see a series of rate cuts. But corporate profits would turn lower, too.

Yet, a recession is not a foregone conclusion. A resilient labor market and a sturdy consumer, with borrowing power and some pandemic cash still in the bank, could help keep the economy on a gradual but upward path this year.

As the economy expands over a long period, corporate profits rise as well. A well-diversified portfolio enables an investor to tap into that longer-term growth. 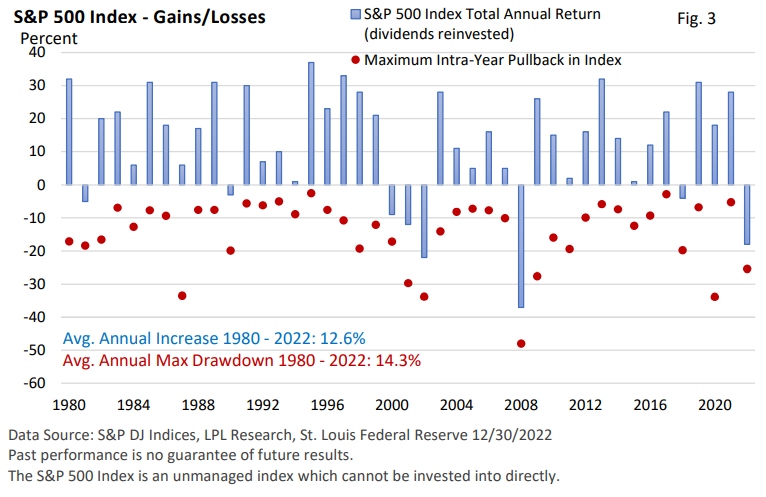 Up years accounted for 81% of the period surveyed. Simply put, on a historical basis, stocks perform well over a longer period, but pullbacks are common, too.

There were 14 instances when the S&P 500 ended a year higher after the broad-based index had an intra-year peak-to-trough selloff of over 10%.

Notably, stocks performed exceedingly well in 1985, 1995, and 2019. These years marked the first year after a Fed rate-hike cycle when the Fed succeeded in engineering a soft landing.

We may not avoid a recession this year, and sentiment heading into 2023 is unsettling. However, if we were to take a contrarian view, any positive surprises could be a catalyst for gains this year.

For example, a sharp slowdown in inflation, without an ensuing recession, would encourage the Fed to adjust policy.

Still, let’s acknowledge that any look ahead is informed by today’s landscape. Peering into the future is an exercise in uncertainty. Surprises, both positive and negative, are to be expected.

A financial plan is never set in concrete. It is a work in progress and can and should be adjusted as life unfolds.

When stocks tumble, some investors become very anxious. When stocks are posting strong returns, others feel invincible and are ready to load up on riskier assets.

We caution against making portfolio adjustments that are simply based on market action.

Remember, the financial plan is the roadmap to your financial goals. In part, it is designed to remove the emotional component that may encourage you to buy or sell at inopportune times.

That said, has your tolerance for risk changed considering this year’s volatility? If so, let’s talk.