We’ve experienced an impressive turnaround from the gloomy sentiment that pervaded the market late last year. It also marks an official milestone for the long-running bull market that began in March 2009. 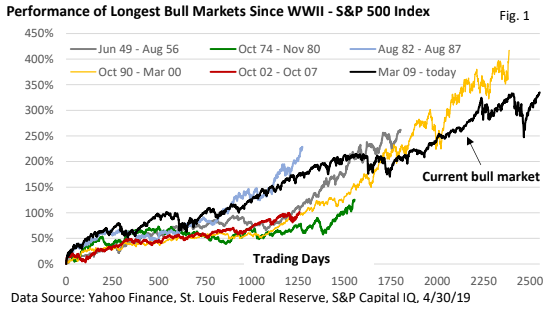 Over the last 50 years, bear markets have coincided with profit-killing recessions. The one notable exception – the 1987 one-day selloff. It topped 20%.

Coincidently (or not), 1998 and 2011 came up just shy of the arbitrary 20% figure. In both cases, a recession did not materialize. While a bear market is inevitable, we’re not yet writing the obituary on the current bull market.

The latest rally to a new high has been marked with low volatility, similar to what we saw during 2017.

While the lack of a sharp downdraft is welcome, let’s also recognize that selloffs aren’t unusual.

Look at Figure 2. Since 1980, the average annual gain in the S&P 500 Index, including reinvested dividends, has been 12.6%. The index has finished in positive territory 32 times, or 82% of the time. Yet, the average intra-year pullback totaled nearly 14%. 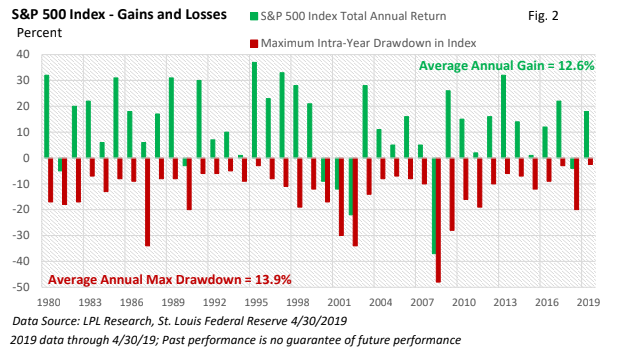 If history is our guide, a pullback this year can’t be ruled out. But, we see that broad-market indexes have historically had a long-term upward bias. Keep in mind that the average annual change can vary by a substantial margin.

A look behind the rally

Risks never completely abate. When the grass appears to be too green and lush, and the high tide covers what lurks on the ocean’s floor, reality usually returns. But, when that occurs, keep Figure 2 in mind.