The U.S. and China were moving toward an historic trade agreement. It seemed as if the missing pieces of the puzzle were about to fall into place.

Then came a surprise tweet by President Trump on Sunday May 5th. Trump said he would raise tariffs on Chinese imports into the U.S.

Odds were low such an event would happen, but May’s Market Insights alluded to the possibility. “The U.S. and China have yet to reach a new trade agreement, and a setback could create unwanted volatility.” Unfortunately, that is what happened.

What came as a complete surprise – a month-end announcement by the president of new levies on all goods imported from Mexico, the 2nd largest U.S. trading partner (U.S. BEA), until “the illegal immigration problem is remedied.”

Investors are now grappling with the fallout of new trade tensions and the possible impact on the U.S. and global economy.

What happened with China? An apparent miscalculation by Chinese negotiators.

Here’s a May 9th headline in the Wall Street Journal: China Hardens Stance as Chinese Negotiators Emboldened by Perception U.S. was Willing to Compromise. A May 8th story by Reuters: China Backtracked on Almost All Aspects of U.S. Trade Deal.

From the vantage point of investors, renewed acrimony and ramped-up rhetoric on both sides have created a new round of volatility, though recent declines have been modest.

What might it mean for investors? Let’s review three possible scenarios.

1. The U.S. and China quickly come to terms – an enforceable trade deal is achieved. It’s the best outcome. Exporters benefit, U.S. intellectual property is protected, and any improvement in business confidence could translate into a new round of capital spending and hiring. Stocks likely rally. But look for Trump to set his sights on Europe and Japan.

2. Talks completely break down and we see more tit-for-tat retaliation – a full-blown trade war. Investors aren’t expecting this outcome. It’s the worst scenario. We would likely see more volatility as investors attempt to price in heightened economic uncertainty and any downside to U.S. and global economic growth.

3. Negotiations drag on for months, maybe through year end and beyond. The two sides appear to be far apart right now. Still, talks are better than no talks.

Yes, housing activity is down (Natl Assoc of Realtors, U.S. Census, U.S. BEA) and manufacturing has softened. But the economic slowdown isn’t as pronounced as the slowdown in 2015-16. And most leading economic indicators aren’t signaling a recession.

While short-term moves are difficult to precisely forecast, there are some important differences between today and the late 2018 selloff.

The flare-up in trade tensions is the latest in a long list of risks and events that have buffeted stocks. Yet, shares have climbed the proverbial wall of worry – see Fig. 1.

The biggest risk to the bull market would be a profit-killing recession. Yet, the historical recipe for a recession isn’t in place – a credit squeeze, higher inflation that prompts higher rates from the Fed, or an asset bubble fueled by easy credit. Still, investors aren’t sure how to price a trade war’s impact on the economy. There isn’t a recent historical precedent. 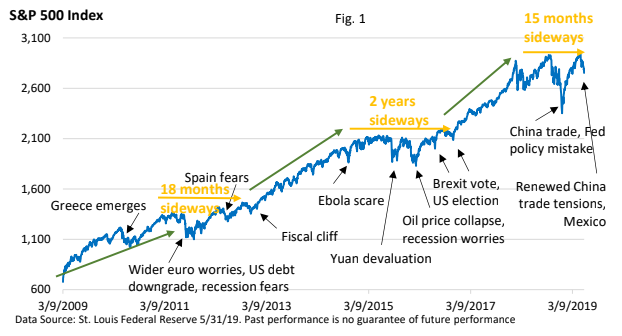 Control what you can control. You can’t control the stock market, and timing the market isn’t a realistic tool. But, you can control the portfolio. Your plan should consider your time horizon, risk tolerance, and financial goals.

Risks never abate. The investment plan doesn’t eliminate risk but helps manage risk. Further, the plan is designed to capture the long-term upward market bias. It helps put you on a path towards your financial goals.